The Gai Waterhouse & Adrian Bott-trained Swift Witness is tipped to continue her winning ways with the filly set to jump favourite in Saturday’s $2 million Magic Millions 2YO Classic at the Gold Coast. 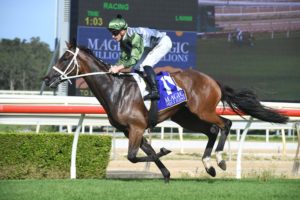 Due to run as Race 6 at 3:15pm (AEST), this summer’s Restricted Listed Magic Millions 2YO Classic (1200m) field is dominated by in-form fillies.

The girls have beaten home the colts and geldings the past four straight years with eight of the past 11 editions of the Magic Millions 2YO Classic won by fillies.

That bodes well for this year’s top elect, classy chestnut Swift Witness coming off a lead-up win at the track from the Saturday.

The progressive daughter of Star Witness debuted on December 16 finishing a distant third in the Wyong Magic Millions 2YO Classic (1100m).

She presented fitter for the run in Queensland last weekend and was enormous when beating home a field of her own kind by an impressive three lengths, despite being awkward out, ahead of her tougher assignment this Saturday.

On the quick back-up, Swift Witness has Brenton Avdulla coming aboard for the ride from gate 11, which could become gate eight if all the emergencies come out.

The latest Magic Millions 2YO Classic odds at Ladbrokes.com.au have Swift Witness at $3.80 to continue her upward trajectory and take out the $1.16 million winners’ cheque.

James McDonald rides the I Am Invincible filly on the weekend from a wide barrier (18) that she will have to be good to overcome if she is to complete the Wyong – Gold Coast Magic Millions Classic double.

Her maiden win at her second start was very good, She’s All Class putting a minimum four and a half lengths on the field, and she’s been brought on fitness wise with a subsequent Rosehill trial on January 4.

Outside of the top two fillies in the field the only other single-figure hopefuls at $8.50 is the undefeated Toby & Trent Edmonds-trained Alpine Edge.

Out to break the successful run for the fillies, this nicely-bred Better Than Ready colt is two-from-two coming into Saturday’s feature.

Both his lead-up wins have been in Black-Type company at Eagle Farm and he will again be ridden by Robbie Fradd on the weekend from barrier nine.

On debut Alpine Edge narrowly won the Listed Phelan Ready Plate (1000m) on December 12 before backing-up at the same course on Boxing Day to salute in the Group 3 BJ McLachlan Stakes (1200m) by a half-length.

This looks a winnable race again for the classy colt who, if the fillies don’t perform up to par, can make it a hat-trick of victories.

The only thing working against Alpine Edge however is being Queensland-trained as no Magic Millions 2YO Classic winner has hailed from the sunshine state since Houtzen (2017).

Last year’s Magic Millions 2YO Classic was won in an upset by the filly Away Game at a blow-out price and there could be value again this season with some nice types at longer odds.

Of the double-figure fancies those considered the most likely to score another upset include the Waller-trained Shaquero ($10) to be ridden by Hugh Bowman from barrier one, the widely-drawn but flying Finance Tycoon ($11) coming off back-to-back wins and Waller’s first emergency Ranch Hand ($11) sweating on a run.