The iconic Melbourne Cup over the two-miles could be on the agenda for the impressive Ladbrokes Cox Plate 2020 winner Sir Dragonet according to jockey Glen Boss who celebrated his fourth success in the 100th running of the weight-for-age championship event. 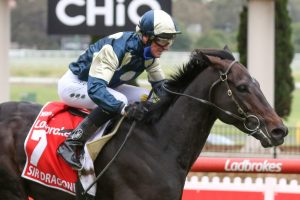 “This is unbelievable…it’s a special race,” an emotional Boss told Racing.com Live after the win.

“I just couldn’t have scripted the run any better. He just gave me a lovely ride.

“He was up for the task.

“Ciaron was really confident with this horse and I was confident too. I really thought once the rain come, this is the right horse.

“This is a really proud moment for me. You know, like I said, growing up and watching this race, to think now I’ve joined Thompson and Hugh Bowman as the most winning jockeys of this race, it is a place to be cherished to be honest.”

A perennial runner-up back in Europe having finished second in his four last runs overseas, the five-year-old Camelot entire proved too good for both the locals and fellow internationals fresh in the Cox Plate.

The noted first-up performer had his first start since a second behind Magical in Ireland’s Group 1 Gold Cup (2012m) at The Curragh back in late July and went around in his Australian debut at $7.50 with race sponsor Ladbrokes.com.au.

After tracking midfield throughout as the three-year-old Grandslam led the Cox Plate field around, Sir Dragonet came late and charged home right up the middle in a brilliant finish to defeat run down his former stablemate, the Adian O’Brien-trained Armory.

In a huge third to round out the Cox Plate trifecta was Danny O’Brien’s beaten favourite, Russian Camelot who had raced around in third then fourth one off the fence throughout.

The post-race commentary from Boss suggested the further the better for Sir Dragonet who could now be considered for a back-up on Tuesday November 3 into the Group 1 $8 million Melbourne Cup (3200m) at Flemington.

“He might just go a little bit better in a Melbourne Cup, I’m telling you, because he was actually just starting to get warmed up towards the line this horse, he was actually getting quicker up near the post,” Boss said.

“He was very strong through the line.”

Co-trainer Maher was full of post-victory gratitude to the team of owners for sending the stable such a highly-performed horse.

“You don’t see that sort of form in this part of the world that much. I just can’t thank them enough.”

With the win, Sir Dragonet is now exempt from Melbourne Cup ballot but just seven Cox Plate champions throughout history have gone on to win the ‘race that stops a nation” with: Makybe Diva, Might And Power, Saintly, Nightmarch, Phar Lap, Delta and Rising Fast.

All-in Melbourne Cup betting online at Ladbrokes.com.au for Sir Dragonet to become the eighth has firmed in from $34 to $9 on the Cox Plate winner with markets available in full here.