Verry Elleegant became the 22nd mare in history to take out the Group 1 $5 million Caulfield Cup (2400m) with a gutsy win over the Irish raider Anthony Van Dyck to secure her 2020 Melbourne Cup bid for trainer Chris Waller. 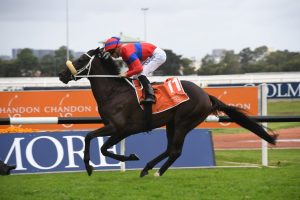 Waller celebrated his maiden Caulfield Cup victory with his brilliant daughter of Zed, Verry Elleegant joining Mongolian Khan ($5 in 2015) and Jameka ($4.25 in 2016) as the only three favourites to salute in the mile and a half classic since 2007.

The 144th running of the Caulfield Cup held a strange atmosphere without the crowds there to cheer on the world’s best stayers, but it mattered little to connections of the winning mare including Waller’s stable rep Jo Taylor.

“She was certainly very tough.”

Jockey Mark Zahra continued his outstanding day at the Caulfield track guiding the now six-time Group 1 winner to victory with Verry Elleegant coming off a lead-up victory in the Group 1 Turnbull Stakes at Flemington.

“It’s a great feeling,” he told the media post-race.

Zahra kept Verry Elleegant wider out one off the fence in midfield position as the UK raider Dashing Willoughby led the Caulfield Cup field around.

Three out of the first four on-speed runners were internationals with True Self running along in third ahead of the Joseph O’Brien-trained Buckhurst, while the well-backed Hawkes Racing-trained local Master Of Wine ran around in second.

The best fancied of the overseas visitors was the Aidan O’Brien-trained Anthony Van Dyck, an Epsom Derby champ carrying the 58.5kg top weight towards the back of the pack.

Anthony Van Dyck was one of the widest horses on the turn for home as the challenges presented themselves including the fast-finishing Murray Baker & Andrew Forsman-trained The Chosen One.

Zahra meanwhile had Verry Elleegant flying down the outside and she moved up to the front runners True Self and The Chosen One at the 300m.

Coming with her from the back was Anthony Van Dyck ($6) and the two best in betting turned the final furlong into a class battle, Verry Elleegant ($5) with less weight able to finish off stronger and win by a neck.

The Chosen One ($61) was eye-catching rounding out the Caulfield Cup trifecta in third at huge odds, while the Charlie Fellowes-trained Prince Of Arran ($17) came from last to fourth.

It was a huge result for the locals as Verry Elleegant became the first Australian-bred Caulfield Cup winner to come off a lead-up run in over a decade.

The champion mare will now be tested over two-miles and head to Flemington on Tuesday November 3 for a shot at the Group 1 $8 million Lexus Melbourne Cup (3200m).

“She’s just kept maturing with age and you’d imagine she’d continue to do that and hopefully this year we’ll head onto a Melbourne Cup,” Taylor confirmed.

“The further she goes she seems to be stronger.

Triple champion Makybe Diva (2003-05) was the last mare to win the Melbourne Cup, while the last Caulfield Cup winner to go on and complete the coveted Spring Cups double was fellow mare Ethereal (2001).

All-in 2020 Melbourne Cup odds online at Ladbrokes.com.au for Verry Elleegant to continue her historic run have firmed in from $19 into $8.

The Caulfield Cup runner-up Anthony Van Dyck has shortened in from $19 to $10, while The Chosen One has been slashed from $67 into $26 after his brilliant third.

Also on the move in futures Melbourne Cup betting is Prince Of Arran ($21 into $15), a dual placegetter in the ‘race that stops a nation’ and fourth in this year’s Caulfield Cup results.