It was the Chris Waller show again in the 2020 Winx Stakes results with his brilliant mare Verry Elleegant returning a gutsy winner when fighting back to hold off stablemate Star The Seas in a photo for the stable’s sixth win in the now Group 1 event. 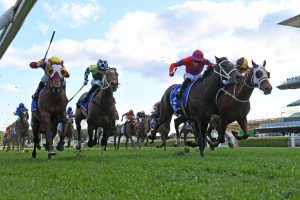 Waller celebrated a record sixth win in the race formerly run as the Group 2 Warwick Stakes having previously taken it out with Metal Bender (2010), Royal Descent (2015) and the event’s now namesake Winx (2016-18).

The master trainer was back for another success in the Group 1 $500,000 Winx Stakes (1400m) and not only that, enjoyed the quinella.

“It’s an honour to win the race, I think Winx won it as well didn’t she?” Waller said with a bit of cheek post-win.

“This horse has come back very well and as you saw there she did a lot of work throughout the run and was still strong late.”

Off a horror run, jockey James McDonald circled the field a long way out on the autumn’s Tancred Stakes winner with Verry Elleegant looking a sitting duck in the closing stages.

The challenge came from the fellow Waller-trained Star The Seas, the Ocean Park six-year-old coming with a charging late run down the outside to join Verry Elleegant 150m out from the line.

Verry Elleegant would not give in however, digging deep and saluting in a photo to kick off her spring campaign in the best way possible.

It was a disappointing result for jockey Sam Clipperton aboard Star The Seas who had to settle for a Group 1 second yet again having been denied the Doncaster Mile success on the same horse when runner-up in that during the autumn.

“We ran second in the Doncaster…I thought he had it but Verry Elleegant stole the show as Winx did with Foxplay one year,” Waller said.

It was nearly a Winx Stakes trifecta for Waller with his Epsom Handicap-bound Imaging running fourth having just been denied third by Matthew Smith’s also eye-catching Fierce Impact.

The challenge for the stable now, according to Waller, is to keep getting Verry Elleegant to peak on race day as she heads towards the majors including the Group 1 $5 million Cox Plate (2040m) at The Valley in October.

“I want her to win the Grand Finals as well. Whether it’s a Cox Plate or the Melbourne Cup, they’ve got a good ring to it and we’ve got the right horse to do it,” Waller told Sky Thoroughbred Central.

Winx famously won the Cox Plate a record four consecutive times over her outstanding career and Verry Elleegant is at a current all-in quote of $10 at race sponsor Ladbrokes.com.au as the equal favourite with SA Derby winner Russian Camelot.

As mentioned, Waller is also considering a shot at the world’s richest handicap, the iconic Group 1 $7.75 million Lexus Melbourne Cup (3200m) with Verry Elleegant this spring.

Futures betting on the 2020 Melbourne Cup lists the mare at $17 to take out the two-mile classic at Flemington on the first Tuesday of November.

Following the Winx Stakes results, Verry Elleegant is also the equal $8 favourite to take out the Group 1 $5 million Caulfield Cup (2400m) on October 17.