The Spirit of Boom filly won the Bill Carter Stakes (1200m) by a nose after quickening down the straight ahead of $4.60 second-elect Gem Of Scotland and fellow stablemate Niedorp.

It was a brilliant ride from jockey Brad Stewart, although the winning hoop admits the barrier certainly played a part.

“There has never really been a lot between her and Niedorp and there wasn’t much between them today, I probably just got a bit more of an economical run in transit” Stewart went on to say. 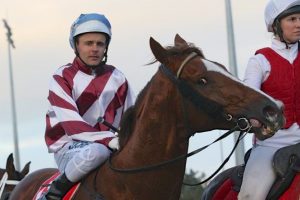 “Barriers can win races at times and as I said, the stablemate had to do a little more work. We got out late and that was the difference.”

Perudo returned to the races after running fourth in the 2YO Aquis Jewell (1200m) at the Gold Coast back in March. A Heavy 10 caused a few problems for the speedy two-year-old, although the freshen up seemed to do the trick.

“She ran on that very Heavy 10 track in that Aquis Jewell race at the Gold Coast and we gave her a couple of weeks off and hummed and harred whether we’d bring her back for the winter” winning trainer Tony Gollan said after the race.

Perudo, who has now won two from four starts, will line up in the $125,000 Oxlade Stakes back at Doomben on June 1.

Gollan, meanwhile, is hoping for the same kind of luck at the barrier draw.

“She’ll come back here next fortnight for the Oxlade and hopefully the barrier gods can shine on me again and give me a nice inside draw,” Gollan said.