The Chris Waller trained gelding entered as a $5.00 co-favourite on the Gold Coast alongside Kenedna, enjoying the run of the race to go on and win by a length.

In a three-wide position down the straight, Life Less Ordinary quickened over the final furlong with wet track specialist Mister Sea Wolf challenging on the inside. It was a brilliant ride from jockey Jason Collett in what was the first Group win of the seven-year-olds lengthy career. 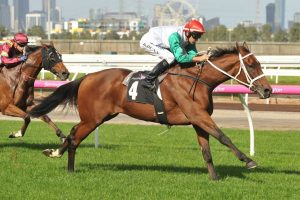 Life Less Ordinary, above, is now an $11.00 chance ahead of next fortnight’s Doomben Cup. Photo Credit: Ultimate Racing Photos.

“When the rain came and the track turned into a genuine heavy 10, heavy 11, really brought him into calculations and the late betting would probably suggest that” Paul Shailer, Waller’s foreman said after the race.

“He was super and a genuine heavy tracker and he has been a consistent performer throughout his career.”

The Hollindale is an ideal form guide in the leadup to the Group 1 Doomben Cup (2000m), which will take place on May 18. Last year’s winner It’s Somewhat ran third in the feature race after winning the Hollindale, but Shailer said after the race there is no direct plan in place despite Saturday’s win.

“I am sure Chris will map out a good plan for him. I am not sure what race is the target for him yet but he is certainly on the right track and if the rain hangs around he is going to be a pretty serious contender in whatever he lines up in.”

Second place-getter Mister Sea Wolf lived up to his reputation on the sticky surface, while Kenedna saw no such luck on the rails.

Full Doomben Cup odds can be seen below.