Five-year old gelding Trap For Fools has recorded the upset of the day at Flemington, claiming the time honoured Mackinnon Stakes to earn trainer Jarrod McLean his first ever Group 1 victory. 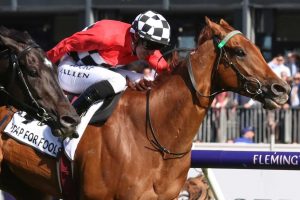 Trap For Fools, above, claimed his first Group 1 win in the Mackinnon Stakes at Flemington on Saturday. Photo Credit: Ultimate Racing Photos.

The $26.00 chance drifted in the Ladbrokes market late, but jumped well from the barriers to lead for the entirety. It came down to a nail-biting finish with LaTrobe looming down the straight, but after setting the tempo from the very beginning, Trap For Fools had enough in the tank to go on and win by a narrow margin.

“He set a good tempo and kept picking it up, Latrobe got to me, I thought he had me at the turn, but he put his head down and really fought” winning jockey John Allen said.

For Allen, the win marked his third of the day, as well as his second Group 1 win of the month after riding Extra Brut to a win in last weekend’s Victoria Derby.

“They were coming at me, and we didn’t go slow, he’s a horse that likes to be left to roll along, so we just set a good solid tempo the whole way, catch me if you can, and luckily enough they couldn’t catch me” Allen said after the race.

Uncharacteristically, $2.50 favourite Blair House settled fourth from the back, but was disappointing down the straight finishing seventh.

LaTrobe also sat second from the back, but moved to a three-wide position on the final turn to fly home and miss out by a nose.

McClean was notably disappointed last month when Trap For Fools missed out on a spot in the Cox Plate, but always knew his horse was a chance when he put his head down to lead early.

“Obviously I was waiting for the post to come up, but first I just wanted to see him kick, and at least I was hoping for that, he sustained the gallop to the line and great ride by Johnny,” McClean said.

For the Warnambool trainer, it’s been a rocky road up to this point, with long time pal Darren Weir helping out when the future of Stealth Lodge Racing looked in doubt.

Weir had his own hopeful in Saturday’s race – $4.80 second-elect Extra Brut. Despite running third though, Weir was happy for McLean.

“We’re competition out on the track, but if I can’t win I certainly hope he does” Weir said.