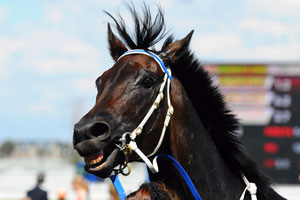 Black Caviar has been rated the world's best racehorse

Australia’s superstar mare Black Caviar has officially been recognised as the world’s best horse with the release of the first international rankings for 2011.

The Bel Esprit four-year-old has been rated 130 in the world rankings and in the Peter Moody-trained mare’s typical record breaking style has achieved another unprecedented feat as the first sprinter to be allocated the number one position.

Black Caviar’s 130 ranking surpasses even that of the former Bart Cummings-trained So You Think with 126 who was formerly the highest-rated Australian horse.

The only racehorse in the country to have won all 11 of their opening career starts on metro tracks in history, Black Caviar is now a four-time Group 1 winner.

Last start she claimed her third elite level win for the year in the William Reid Stakes (1200m).

It was her victory prior to the William Reid, Black Caviar’s blistering three length annihilation of her rivals in the $1 million Group 1 Newmarket Handicap (1200m) at Flemington on March 12, that most impressed the International Federations of Horse authorities (IFHA).

Black Caviar’s Newmarket victory has been regarded as the best performance by a thoroughbred in the world for the six-month time frame from October 1, 2010 to March 27, 2011.

The World Thoroughbred Rankings (WTR) was inaugurated in 2002.

Since then no sprinter has held the top position until now, Black Caviar also the first Australian horse to head the WTR and the equally best ranked mare of all time along with France’s Goldikova (130 in 2009).

“It is particularly pleasing that she (Black Caviar) has broken ground for sprinters in the World Thoroughbred Rankings and showcased the growing strength of Australian racing on the world stage,” Greg Carpenter chairman of the ANZ Classifications Committee and the WTR committee’s Australian representative said.

Following Black Caviar for the top five positions in the 50 active thoroughbred racehorses in the world are:

Other Australian horses to make the list include boom galloper Hay List, weight-for-age champion Whobegotyou and evergreen veteran Zipping all equal 30th on 120.

Black Caviar will be out to extend her freakish succession of wins to 12 this Saturday, April 9, when she contests the $1 million Group 1 TJ Smith Stakes (1200m) at Randwick.

There were 13 other sprinters nominated to take on Black Caviar in her next race.

Other TJ Smith Stakes entries include Crystal Lily coming off two second place finishes behind Black Caviar in the Newmarket and William Reid, and Hay List resuming after running second in the Lightning Stakes back in February.

The 2011 TJ Smith Stakes is one of nine Group races running for Randwick’s AJC Australian Derby Day on Saturday.

Final fields for all the Derby Day features will be released tomorrow and published here first at Races.com.au.