The Glenlogan Park Stakes is a Group 3 race for fillies & mares contested on Kingsford Smith Cup Day at Eagle Farm Racecourse as a Queensland Winter Racing Carnival lead-up to the Tattersall's Tiara. 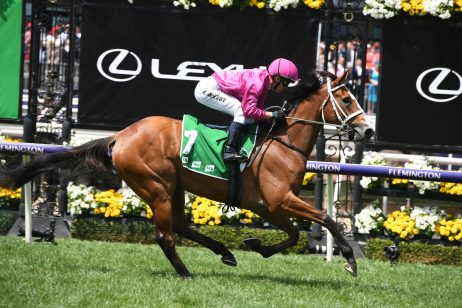 The Group 3 Glenlogan Park Stakes – formerly the Lady Of The Turf Stakes – is a middle distance sprint held under set weights conditions annually at Eagle Farm Racecourse on Kingsford-Smith Cup Day. Open only to fillies and mares, the Glenlogan Park Stakes pays a total of $150,000 prizemoney and up until 2017 was contested at Doomben on Doomben 10,000 Day.

Raced over 1300 metres, the Glenlogan Park Stakes attracts some of the finest local mares and fillies, as well as some solid interstate runners during their Brisbane Winter Racing Carnival bids. The runners may have had a lead-up in a race like Adelaide’s Group 1 Robert Sangster Stakes (1200m) and the likely next-up option for female gallopers out of the race is the Group 2 Dane Ripper Stakes (1400m) back at the track a fortnight later on Stradbroke Handicap Day.

The 2019 Glenlogan Park Stakes ran at Eagle Farm Racecourse on Saturday May 25, 2019 as the Grinders Coffee Roasters Stakes and saw Savatiano run down the race favourite Quilista.

Savatiano was back in winning form breaking a notable drought with an impressive victory by the Godolphin-raced mare over the favourite Quilista who was too keen early in the run. Eckstein dropped back in grade after three tough Group 1 losses in Sydney to finish off the trifecta in third.

The season’s latest Glenlogan Park Stakes 2019 betting odds on the fillies and mares targeting a later Queensland Winter Racing Carnival Group 1 run in the Tattersall’s Tiara the following month will be provided below complete with market links to Ladbrokes.com.au the week of the race.

Each winter the Genlogan Park Stakes field attracts a quality line-up of fillies and mares that are likely on the path towards the Group 1 Tattersall’s Tiara (1400m) held back at the track a month later.

The final Glenlogan Park Stakes 2019 Field & Barriers are set for release the Wednesday of race week and will be published in full below.

The official Glenlogan Park Stakes 2019 nominations are taken by Racing Queensland on the Monday of race week and will be published right here.

The Glenlogan Park Stakes was first run in 1985 and was known as the Rosemount Wine Stakes. Over the years, the race has experienced a number of name changes and has been known variously as:

The Glenlogan Park Stakes was initially run as a Listed race, until it was upgraded to a Group 3 in 2010. A broad variety of horses have won this race, coming from a diverse background of pedigree and former racing experience.

Notable recent winners of the Glenlogan Park Stakes include Ortensia (2009) who went on to great international campaigns in Dubai and England, Wealth Princess and Stella Maree. From 2017 onwards the race moved from Doomben to Eagle Farm Racecourse due to a reshuffle of the Brisbane Winter Racing Carnival program.

Glenlogan Park Stakes results since 2000 are listed below.