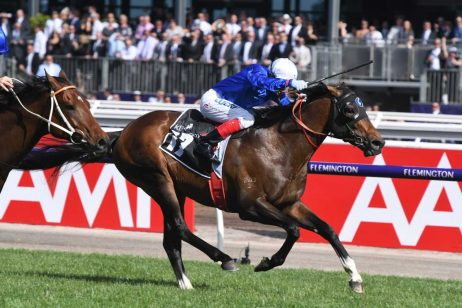 The Murrumbidgee Turf Club is located on the superb Wagga Racecourse, just 4.5 hours from both Sydney and Melbourne in the city of Wagga Wagga.

The racecourse was originally established in 1849 and underwent rebuilding in 1993. It now features a new grandstand complete with three function rooms. The track itself has a 2200 metre circumference and a 400 metre straight.

There are 25 race meets each year including the much anticipated Wagga Gold Cup carnival held on the first Friday of May. The Cup attracts 17,000 spectators each year and also features the Myer Fashions on the Field. The Wagga Cup itself is worth $120,000 in prize money with another 7 races on the day’s list. The venue’s gates open at 10:30 am for a 12.50 pm start. The Gold Cup is run at 4.25 pm and guests can be entertained by live bands and a smorgasbord luncheon during the day.

The Town Plate Day is held one day before the Cup Carnival and there are also major race meets on the Caulfield and Melbourne Cup days and Christmas Eve and Easter Saturday. The Ted Ryder Cup day is held in December with the TAB 100 Club hosting races each week. Races held during the year attract between $2,000 and $25,000 in prize money including the 1000m Open Handicap worth $25,000, the 1600m Class B Handicap worth $2,000, the 1600m Guineas worth $25,000 and several Maiden Plates.

Here are your transport options if you want to know how to get to Wagga Racecourse:

The nearest train station is Wagga Wagga Station, on the Southern CountryLink line. It is then a 3km walk to Wagga Racecourse.
Plan your journey with the Countrylink Timetable.

Wagga Racecourse is on Slocum Street in Wagga Wagga, 5 hours south-west of the Sydney CBD. You can drive along the Hume Highway most of the way and just follow the signs to Wagga Wagga.