Phillip Stokes’ Sir John Monash Stakes winning mare Mileva is back at Caulfield Racecourse this weekend heading markets on the 2022 Bletchingly Stakes as she looks to complete the Group 3 winter double second-up. 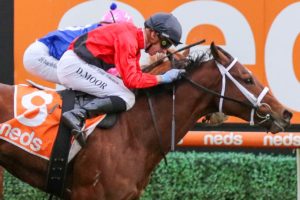 Fresh, the four-year-old daughter of Headwater was brave narrowly holding on to win the Group 3 Sir John Monash Stakes (1100m) on July 9.

She returns fitter for the run this Saturday heading markets on a small 10-horse field for the Group 3 $200,000 Bletchingly Stakes (1200m).

Drawn the outside barrier, jockey Daniel Moor retains the ride on Mileva who is out to win the Sir John Monash – Bletchingly Stakes double for the first time since Rubitano (2002).

The bookies are suggesting she can with Mileva sitting top of the Bletchingly Stakes odds at $4.60 through Ladbrokes.com.au.

It is an open edition of the weight-for-age winter sprint with a further five runners under double-figures for the win.

The current equal $6 second elects are the Peter Moody-trained Oxley Road and the Peter & Paul Snowden-trained King Of Sparta drawn in barriers eight and one respectively.

First-up in the autumn he was second in the Group 2 Rubiton Stakes (1000m) behind Marine One before a third to Marabi in the Group 1 Oakleigh Plate (1100m).

His last start produced a seventh in the Sir John Monash, a run that was better than it reads on paper with the entire under two lengths beaten with improvement to come.

King Of Sparta is out to be the first three-year-old Bletchingly Stakes winner since Thiamandi (2014), the son of I Am Invincible racing second-up with Jye McNeil to ride.

First-up the gelding, best known for his $2 million Magic Millions 3YO Guineas win at the Gold Coast back in January, finished sixth to Juan Diva in Eagle Farm’s Group 3 WJ Healy Stakes (1200m).

He won a subsequent Hawkesbury trial through the week and, if he can settle better in his run, presents as a threat.

The seven-year-old son of Magnus is after his first win since the Group 1 C.F. Orr Stakes at the Caulfield track back in 2021.

He was runner-up fresh the past two years and returns after an excellent autumn headlined by his third in the $5 million The All-Star Mile (1600m) behind Zaaki.

Rounding out the single-figure Bletchingly Stakes chances this season are then the Joe Pride-trained Mariamia ($7) coming off back-to-back fourth placings this winter in good company and early market mover Scallopini ($9) from Brisbane.

The 2022 Bletchingly Stakes is set to run as Caulfield Race 8 at 4:20pm with full markets available here thanks to Ladbrokes.com.au.