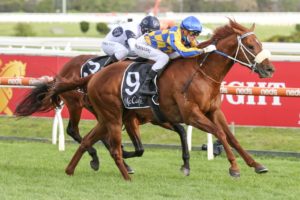 An eleven-horse line-up takes to the track for this year’s Group 3 $200,000 Neds Sir John Monash Stakes (1100m) and the first-up favourite is drawn mid-field in barrier five for jockey Luke Nolen.

Moody and Nolan combined to win this race back in 2010 with former star juvenile Reward For Effort, and the duo return on Saturday saddling-up the top elect.

Oxley Road sits top of the Sir John Monash Stakes odds at $2.80 and firming through Ladbrokes.com.au, the Exceed And Excel four-year-old looking to add to his solid record fresh.

Somewhat of a specialist at the Caulfield track, the entire won the Group 2 Caulfield Sprint (1000m) here last October, and chases his first win since.

During the autumn he performed well in tougher grade finishing runner-up to Marine One in the Group 2 Rubiton Stakes (1100m) here, before his eye-catching third at a big price in the Group 1 Oakleigh Plate (1100m).

Things went amiss for him down the straight at Flemington when he ran dead last (17th) in the Group 1 Newmarket Handicap (1200m) with excuses.

Back at Caulfield off a four-month break, Oxley Road looks ready to atone and is the class horse in this year’s event.

The danger occupying the second line of Sir John Monash Stakes betting at $3.70 is the Phillip Stokes-trained Mileva in gate three first-up with Daniel Moor to ride.

The four-year-old daughter of Headwater has a gun record over the distance boasting three wins and two other minor placings from her six previous 1100m runs.

She has had just the one run at Caulfield when winning the Listed Alinghi Stakes (1100m) at a blowout price during the spring, before a host of quality runs at Flemington between then and now.

Two back she ran fourth only 1.45 lengths beaten in the Group 3 Standish Handicap (1200m), while her last start seventh at HQ in the Listed Bob Hoysted (1000m) was better than the placing suggests with the mare only a length off the winner in a true blanket finish.

Fresh here she will relish the distance and looks a genuine chance at this grade off her break.

A further two runners are at single-figures with the in-form Ashford Street ($6.50) chasing a hat-trick, and Felicia ($8.50) returning from gate four with Jye McNeil in the saddle.

Ashford Street has won three of his past four starts, the Ken Elford-trained Moshe gelding another genuine 1100m runner (8:5-0-1).

He brings in plenty off confidence after back-to-back 1000m wins at Caulfield and Sandown-Hillside respectively by a combined margin of over five lengths, but will need to be good again in tougher grade on a firmer track.

The Dean Binaisse-trained Felicia meanwhile is after her first victory since a two-length success here in the Group 3 How Now back in September of 2020.

The now five-year-old daughter of Unencumbered has been lightly raced since and had just the one start in the whole of 2021 when third in the VOBIS Gold Sprint (1200m) in mid-April.

It’s been a long time between runs, but there is money for her to pick up where she left off performing well in the Group 3 Caulfield races.

The 2022 Sir John Monash Stakes is set to run as Caulfield Race 8 at 4:10pm (AEST), and full markets on the event courtesy of Ladbrokes.com.au can be found here.