The money is coming for the Kiwis to destroy the competition in Saturday’s 2022 Queensland Derby with last start Rough Habit Plate winner, Dark Destroyer, firming favourite for the mile and a half classic at Eagle Farm. 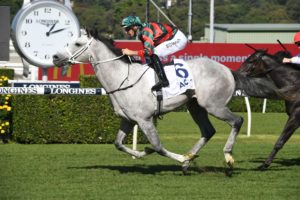 One of three Group 1 races now on Eagle Farm race card with the addition of the rescheduled Doomben Cup, the $1 million Queensland Derby (2400m) field features a capacity line-up of three-year-old stayers.

Sitting top of the Queensland Derby odds online at Ladbrokes.com.au into $4 is the Lance O’Sullivan & Andrew Scott-trained New Zealand raider Dark Destroyer drawn the inside alley.

The Proisir gelding is putting together a very nice record and is now four-from-nine after his lead-up win in the Group 3 Rough Habit Plate (2143m) run here in the wet on May 14.

Jockey Sam Weatherley continues associations on Dark Destroyer in the Derby, the horse out to complete the Rough Habit – QLD Derby double for the first time since Dark Dream (2018).

Despite a capacity field, there are only three other single-figure fancies in Queensland Derby betting this winter including the $6 second elect Paternal.

This season he saddles-up four confirmed starters and also has the first emergency Turn Me Over.

The best fancied of the Waller contingent, Kiwi-bred Savabeel gelding Paternal is looking to turn the tables on his last start conqueror Dark Destroyer after going down just a neck at 30/1 in the Rough Habit Plate.

Fit and ready to fire, he won’t be found at that price in the Group 1 rematch and jumps from gate three with Hugh Bowman coming aboard for the ride.

The other Waller-trained hopefuls in the Queensland Derby field are: Caboche ($9), Villaden ($21) and Nest Egg ($41).

Caboche presents as a genuine contender up in grade from barrier nine with James McDonald to ride, the Vadamos gelding coming off back-to-back seconds in easier grade including a devastatingly close finish last start over 2200m in the wet at Scone on May 14.

Rounding out the hopes under $10 for the win at $8 is the widely-drawn New Zealander Pinarello drawn gate 20 with Leith Innes over for the ride.

Innes rode the Roger James & Robert Wellwood-trained son of Tavistock at home last start for a Group 2 win by 2.5 lengths over 2100m back in April.

Prior to that Pinarello ran a credible fifth to Asterix in the Group 1 New Zealand Derby (2400m) and he gets conditions to suit for his Australian debut on the weekend.

The 2022 Queensland Derby is scheduled to run as Eagle Farm Race 8 at 3:18pm (AEST) and full markets are available here courtesy of Ladbrokes.com.au.