Hitotsu continued to defy history in the Australian Derby 2022 results at Randwick backing up from his Australian Guineas win fresh to salute for the punters in a thrilling finish over the mile and a half. 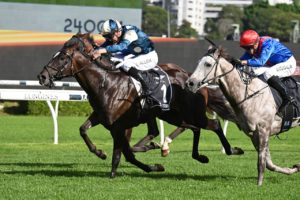 Hitotsu was so brave winning the 2022 Australian Derby fresh off his Australian Guineas win over a mile first-up in Melbourne. Photo: Steve Hart.

In a masterful training performance by Ciaron Maher & David Eustace, the stable got Hitotsu to go from 1600m to 2400m without a run in between and win this year’s Group 1 $2 million Australian Derby (2400m) in brave performance.

It was the same blueprint they used in the spring when the star Maurice colt improved on his Caulfield Guineas fifth to Anamoe over 1600m to win the Group 1 Victoria Derby (2500m) next run at Flemington by nearly two lengths.

After becoming history’s inaugural first-up Australian Guineas winner at headquarters on March 5, Hitotsu did it again and completed the interstate Victoria Derby – Australian Derby double for the first time since Mahogany (1993/94).

“We knew everything had to go right for him at the mile and he got a beautiful ride by Johnny (Allen). Once he did that, I was full of confidence to come here. The only negative was the track but I knew his ability would take him a long way. I thought he would actually travel a little stronger than what he did. He certainly wasn’t at home on it but his class and ability shone through.”

The Irishman is now a 17-time Group 1 winner in Australia, nine of which have come in various Derby races around the country with success in the: South Australian Derby (4), Victoria Derby (2), Queensland Derby (1) and Australian Derby (2) all since 2016.

He is also a two-time Tasmanian Derby winning jockey and was in for the fight aboard this year’s Australian Derby favourite Hitotsu who did not get things easy late in the piece and the horse better suited on firmer going.

“Very good, he never handled the ground. He was very lethargic out of the gates today and I didn’t want to boss him, just left him alone. I ended up getting a nice cart up behind (Forgot You), he just travelled well enough into it without ever really getting through the ground well. I gave him a squeeze around the corner and he picked up and hit the front a bit soon. Just his toughness, he just battled back and put them away again,” Allen said.

“It probably just woke him up a bit (suffering interference on the home straight) and made him fight because Brenton Avdulla (on the second horse Benaud) definitely headed me outside me. I was surprised when he came off my back and probably put a good neck on me, but he’s just tough this horse he showed his fighting qualities. He really had to dig in to win the (Australian) Guineas and once again today. Very exciting future hopefully.

“Definitely (he can improve over further distance). As I said he never handled the ground, he never really picked up the bit today I had to kind of squeeze him along the whole way. But back on top of the ground hopefully he’ll be winning more good races.”

After being settled back in the second half of the strung-out field throughout, Hitotsu came with a big run out wide on the home straight as they bunched around the turn and the John O’Shea-trained grey Benaud came with him.

There were three young stayers going stride-for-stride to the line, Godolphin’s VRC Derby runner-up from the spring Alegron coming up through the centre as Hitotsu lifted in the centre and Benaud kept challenging on his outside.

Benaud, ridden by Brenton Avdulla who took out the previous saluting on Fireburn in the Inglis Sires’, swept up looking to score the upset.

In a run full of merit, Hitotsu was able to cling on and simply outstayed his rival by a neck with Alegron a long neck back third to complete the ATC Derby trifecta.

Stamping himself as a serious racehorse, Maher ruled out any thoughts that Hitotsu may return Saturday week on Day 2 of The Championships for a shot at the $4 million Group 1 Queen Elizabeth Stakes (2000m).

“No. We are fair to him, he is fair to us. We will get him ready for a Cox Plate now, he doesn’t need to race the older horses. As you can see he is still furnishing and we’ll take them on in the spring,” Maher said.

All-in 2022 Ladbrokes Cox Plate odds at race sponsor Ladbrokes.com.au have Hitotsu at $10 for the October 22nd feature and are available in full here.