The 2022 Inglis Sires’ results saw Gary Portelli’s outstanding filly Fireburn salute for the fifth time on the trot backing up from her magic Golden Slipper performance to easily account for her rivals ahead of the Champagne Stakes over a mile in a fortnight. 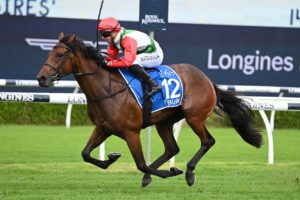 There were only two fillies in the Group 1 $1 million Inglis Sires’ (1400m) field this year and they dominated the race, Fireburn so strong late putting two lengths on the brave runner-up She’s Extreme.

The two-year-old daughter of Rebel Dane is now five-from-six and improving each start.

She overcame a horror run in the Group 1 $5 million Golden Slipper (1200m) to win the world’s richest race for juveniles on March 19 and was equally impressive with Brenton Avdulla retaining the ride for the Sires’.

“What a filly. She just turns up week after week and she raises the bar,” winning trainer Portelli told the media post-win.

“She was set a task in the Slipper and she proved herself. A few people were knocking her before the race today thinking it might have been a one-off thing, but they don’t do that in Slippers and still win.

“She’s got a big motor and these horses come around once in a lifetime. We’ve got the Winx Stand and hopefully one day we put the Fireburn stand beside it.”

“She doesn’t show me this at home, she just does this race day. She is a special horse.”

“Early on, she wasn’t showing enough.

“She just knows how to win and she finds a way. She has that acceleration that (her sire) Rebel Dane had when he was at his best at three, he would set his sights on them and run them down and she does the same.”

Sure to be crowned the Champion 2YO of the Season, Fireburn wasn’t called upon until the 450m with Avdulla having settled back off the pace as the Blue Diamond winner Daumier lead the field around.

Right up on speed from her wide draw was Anthony Cummings’ well-backed Extreme Choice filly She’s Extreme travelling second throughout on the back of her forgivable seventh in the Slipper.

Daumier led around the home turn, but She’s Extreme was right there with him moving up to take the lead at the 300m as the favourite Fireburn began to improve along the rails closing hard.

The fillies drew well clear of the boys and fought it out the final furlong, Fireburn hitting the front 150m out going past She’s Extreme in an exciting performance that had Avdulla cheekily gesturing for second placed hoop Tommy Berry to keep up.

It was a super ride by Avdulla who looked very confident a long way out, his filly grabbing the big when she had to before savaging the line in her first run over 1400m.

“I said to my manager this morning I haven’t had so much confidence going into a Group 1 race, the last time I was that confident was probably Ilovethiscity into the Randwick Guineas and I probably pressed the trigger about a furlong too early and still won,” Avdulla said.

“I didn’t think they could beat her and when Anthony (Cummings – trainer of the second horse She’s Extreme) came out and said he reckons they would’ve won the Slipper the other day with her that’s why I gave a bit of cheek at the 50m ‘C’mon, come with me’. She’s a superstar.”

“She deserves to be champion two-year-old. A bit of history I don’t think any filly has done it for a long time and there’s no reason why she can’t do the triple crown. If she does that she’s one of the greatest of all time.

“This is what you get up for every morning, if you told me this three months ago I would’ve told you you’re kidding. To be a multiple Group 1 winner on her and three for the carnival so far. Gary (Portelli) has obviously done a marvelous job with his team and full credit to my manager, he’s got me up got me going well. James Winks, he’s battled me out of some demons and to all my family this is what it’s about.

“She was probably in the worst part of the track and once I set her alight she was off and she was quite soft again so it will take a good one to beat her in two weeks (in the Champagne Stakes).”

In a distant third the best home of the boys was Danny O’Brien’s previously undefeated Dundeel colt Let’srollthedice backing up from his Group 2 VRC Sires’ Produce Stakes (1400m) win in Melbourne.

Fireburn is now the drawcard of All Aged Stakes Day at Royal Randwick on April 16 where she will chase a rare treble looking to emulate Pierro (2012) in winning the Group 1 $500,000 Champagne Stakes (1600m).

He was the last two-year-old to take out the Golden Slipper – ATC Sires’ – Champagne Stakes Triple Crown, while the Sires – Champagne double was most recently completed by King’s Legacy (2020).