Chris Waller‘s Melbourne Cup champion Verry Elleegant will have to wait another day to secure her 12th Group 1 win after the star was well beaten in an upset Ranvet Stakes 2022 result by another very good mare in Montefilia. 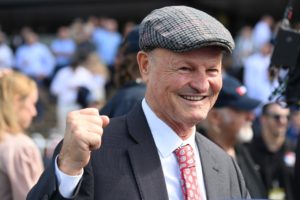 The first of five Group 1s on the card, the Ranvet Stakes (2000m) field featured just six runners and all the money was on Waller’s last-start Chipping Norton champ looking to repeat the same double she completed last Sydney Autumn Racing Carnival.

James McDonald was happy to sit back last upon settling with Verry Elleegant, cruising up on the point of the turn and presenting at the right time only to be beaten home by the David Payne-trained Montefilia down the straight.

“I knew, you’re not going to get past her. I just said, whatever you do, don’t let (James) McDonald close you up. If you look at her now she is a different filly, mare now. She is much stronger. And this is only her second run back so I think she will improve a bit as well,” winning trainer Payne told the media post-win.

“I must be honest, I didn’t think much of her at first. We ran her at Newcastle and she won and then we ran her again and she ran fourth (in the Group 3 Baillieu Handicap). When I realised she was good was when she beat the older horses here over 1500 as a two-year old.

“It’s special because Verry Elleegant is the Horse of the Year so I wonder what it makes her (Montefilia) now. She must be up there.”

Ridden by arguably the country’s leading wet-track hoop Jason Collett, four-year-old Kermadec mare Montefilia presented fit second-up in the Ranvet and atoned for her last start seventh to Verry Elleegant in the Chipping Norton over the mile in late February.

Last year’s The Metropolitan winner relished the step-up to 2000m to secure her fourth career Group 1, running away over the concluding stages to claim the scalp of one of the history’s best.

“Last start I rode her too handy, it didn’t flow – it was a stop start, she was held up and got going late. She needed a bit of room and I just wanted to make sure I was in that spot,” Collett said.

“Whether I was in front of James (McDonald) or behind, ideally in front because it’s very difficult to outsprint Verry Elleegant in the straight, but when that tempo sort of came off mid-race I just had a lovely rhythm and I got into the straight on the bridle with James (McDonald) still behind me.

“I know when she lets down she can let down like that. ”

Montefilia settled fourth as Entente lead the Ranvet field around, before Collett pulled three-wide at the 600m.

McDonald got right onto his back, but Verry Elleegant could not reign in Montefilia who hit the lead 350m out before giving a lovely kick to fend off the top elect and draw one and three-quarters of a length clear on the line.

Verry Elleegant and Montefilia are likely to clash again at Randwick during ‘The Championships’ on April 9 with both on track for the $4 million Group 1 Queen Elizabeth Stakes (2000m).

“She is just a different horse,” Payne said.

“We are going for the Queen Elizabeth now, definitely. She is a special horse. I’ll look after her. I want the Melbourne Cup with her later hopefully.”

Verry Elleegant has run second twice in as many years in the Queen Elizabeth and is the current all-in favourite at $3.70 through Ladbrokes.com.au.