Chris Waller’s brilliant mare Verry Elleegant is odds-on to take her number of Group 1 wins to a dozen facing just five rivals when defending her title in the 2022 Ranvet Stakes in Sydney on Saturday. 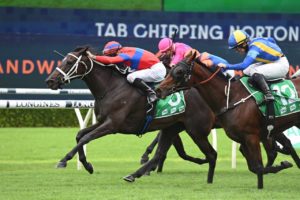 Verry Elleegant is odds-on in the 2022 Ranvet Stakes markets to record her 12th Group 1 success this Saturday. Photo: Steve Hart.

On Golden Slipper Stakes Day last year, the star daughter of Zed backed up from a Chipping Norton Stakes win to take out the Group 1 $700,000 Ranvet Stakes (2000m) having run second in both races in 2020.

The now six-year-old looks to complete the same double 12 months on further adding to her incredible legacy.

Last year’s Melbourne Cup champion was brave second-up on a Heavy (10) in the Chipping Norton and will be better over further third-up and fit in a very winnable edition of the Ranvet.

With the superlative reigning champ scaring off the bulk of potential rivals, the danger is David Payne’s $5.50 second elect Montefilia in gate two.

A genuine staying type she was fourth after that in the Group 1 Caulfield Cup (2400m) down south and returned in the Chipping Norton.

There she ran seventh, albeit only two and a half-lengths off Verry Elleegant, and she has improvement going up to 2000m second-up in the rematch.

The other single-figure hope looking to rain on the turf queen’s parade at current Ranvet Stakes odds of $8 is another Chipping Norton graduate, the Hawkes Racing-trained third place-getter Angel Of Truth.

It has been a very long time between drinks for the Animal Kingdom six-year-old who hasn’t won since his Group 1 ATC Derby (2400m) victory three years ago and his price definitely looks a little short considering who he is up against again in the Ranvet.

The 2022 Ranvet Stakes is set to run as Rosehill Race 5 at 2:40pm (AEDT) and full markets courtesy of Ladbrokes.com.au are available in full here.