2022 The All-Star Mile Field Update: Cascadian In, Behemoth Out

Godolphin’s reigning Doncaster champion Cascadian gets his shot at the world’s richest mile race coming in to replace the withdrawn Behemoth in The All-Star Mile 2022 field in March. 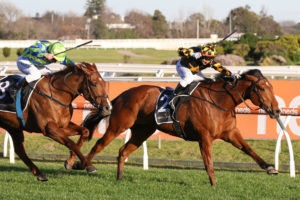 Behemoth has been withdrawn from the 2022 The All-Star Mile due to injury. Photo: Ultimate Racing Photos.

David Jolly’s hulking South Australian star Behemoth was originally the sixth most voted for horse (6,222 votes) for the fourth edition of the $5 million Seppelt Wines All-Star Mile (1600m), which returns to its inaugural home at Flemington on March 19.

Late last week however the champ, third to Mugatoo in last year’s The All-Star Mile results, was withdrawn due to injury, paving the way for the James Cummings-trained New Approach seven-year-old Cascadian to come in as the 10th horse assured of a run in the 15-starter field.

“The connections have been great supporters of this race and had targeted Behemoth’s campaign at going two places better than his 2021 minor placing.

“James Cummings was delighted to take up the opportunity to start Cascadian in the race and why wouldn’t he be as his horse has been in amazing form over the past year winning the Doncaster Mile and placing in four Group 1 races including an eye-catching return at Caulfield last weekend.”

Both Behemoth and Cascadian were last seen running in the Group 1 C.F. Orr Stakes (1400m) at Caulfield on February 12 running 10th and third behind the winner Tofane respectively.

The Peter Moody-trained Lightsaber, scratched at the barriers as the pre-race favourite in last weekend’s Group 3 CS Hayes Stakes (1400m), recorded the next highest number of votes in the unenviable 11th position missing out on a call-up by just five counts.

Once voting has been completed however, the race conditions allow for the next highest-rated horse on the provisional emergency list and not the next highest-voted runner to come in for any subsequent withdrawals.

Cummings prepared two of the minor placegetters in the first edition of The All-Star Mile with Hartnell (2nd) and Alizee (3rd) behind Mystic Journey back in 2019.

The Annabel Neasham-trained Zaaki ($4.40) is current favourite in all-in 2022 The All-Star Mile betting at Ladbrokes.com.au followed closely by I’m Thunderstruck ($4.80).

Cascadian is also at single-figure The All-Star Mile odds of $9 with full markets available here.