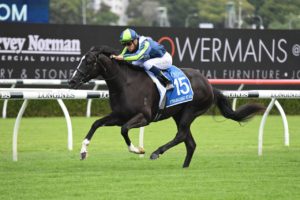 The punters came in a big way on the day for the nicely-bred daughter of Xtravagant and she did not disappoint, displaying a scintillating turn of foot to easily account for her fellow two-year-olds in the lucrative feature.

The bonny black filly is now two-from-two having come off a fighting and narrow victory on debut at Geelong a month ago to defeat the Peter & Paul Snowden-trained favourite Paris Dior by one and a half-lengths in the Inglis Millennium results.

“She’s a really good filly,” her co-trainer told Thoroughbred Central after the win.

“She always showed us a bit of talent. We went to that race at Geelong pretty confident, she had to fight to win and showed that she’s got speed and is tough.

“We’re so excited for her to come away her first trip away from home, and the way she’s handled herself is just magnificent, a big thrill.

Jockey Chad Schofield came aboard for the ride and, after jumping well, got the eventual winner to settle in third as Athletica rolled up on the outside of Sweet Ride to lead.

Showing an excellent high cruising speed, Xtravagant Star relaxed outside the pace and responded phenomenally when Schofield asked her to go.

She ran the 1100m right out on top of the speed and was too good the closing stages repaying a well-executed training performance from Tony & Calvin McEvoy.

In third rounding out the Inglis Millennium trifecta was the Gary Portelli-trained Sejardan.

Xtravagant Star is bound for a Group 1 run this campaign, but whether that is in Melbourne or Sydney is yet to be confirmed.

“We’ve got some beautiful decisions to make,” McEvoy said.

“We can go to the (Blue) Diamond in three weeks or we can just concentrate on the  (Golden) Slipper, it’s a bit hard to do both I think.

“But I think we just enjoy today and make a few decisions in the coming weeks.

“I’m liking her more and more.”

Futures Golden Slipper 2022 betting markets – available in full here – have her at a slightly longer quote of $18.

Lyre (2019) was the last Blue Diamond Stakes winning filly, while the girls also finished on top in that year’s Golden Slipper with the win by Kiamichi.