Saturday sees the next big thing in Perth racing line-up as the odds-on favourite in the 2021 Kingston Town Classic with the Grant & Alana Williams-trained Western Empire out to secure the final Australian Group 1 of the year. 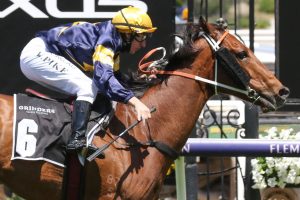 A small field of 10 runners is gathered for this weekend’s Group 1 $1 million Kingston Town Classic (1800m) and all the money is on flying Iffraaj four-year-old Western Empire.

A winner of seven of his 12 career starts, the gun youngster chases a seventh win on the trot in Saturday’s feature on the back of his dominant Group 1 Railway Stakes (1600m) victory a fortnight ago.

Western Empire was odds-on in the Railway and didn’t disappoint beating his closest rival by four lengths in a bullish effort with Perth’s premier hoop William Pike in the saddle.

Pike continues associations with the galloper in the Kingston Town Classic, the jockey after his third win in the weight-for-age event following past success aboard Perfect Reflection (2015) and Arcadia Queen (2018).

Both of Pike’s past winners were prepared by Grant Williams, the latter in partnership with Williams’ daughter Alana, and the stable also enjoyed success last Perth Summer Racing Carnival with the ill-fated Truly Great (2020).

Western Empire is currently paying $1.45 in the Kingston Town Classic odds at Ladbrokes.com.au to give the father-daughter duo back-to-back wins.

The horse is out to complete the Railway Stakes – Kingston Town Classic double in the same year for the first time since Sniper’s Bullet (2009).

Western Empire is out to do the Railway Stakes – Kingston Town Classic double in the same year for the first time since Sniper’s Bullet in 2009 Bet now with Ladbrokes.com.au

The top elect is drawn barrier nine and will relish the step-up to 1800m third-up having won the autumn’s Group 2 WATC Derby (2400m) over the mile and a half.

The only potential query is weight-for-age, Western Empire going up from 53kg in the Railway to 58.5kg.

There is just one other single-figure hopeful in Kingston Town Classic betting this season with the fellow Grant & Alana Williams-trained Regal Power at $6 and also racing third-up.

A winner of just shy of $3.8 million in prize money, the now six-year-old son of Pierro also won the WATC Derby during his three-year-old season in 2019.

His glittering CV is also highlighted by victories in that year’s Railway Stakes and Ted Van Heemst Stakes, and of course the $5 million All-Star Mile in Melbourne back in March of 2020.

Regal Power has not won since his All-Star Mile success at Caulfield, but has been eye-catching this campaign with back-to-back fourths most recently behind Massimo on November 6 in the Group 2 Lee Steere Stakes (1400m) only two lengths beaten.

Along with Western Empire, the other last-start winner in the Kingston Town Classic field is Searchin’ Roc’s at $10 in gate three.

David Harrison’s progressive Awesome Rock filly has been working up the grades this campaign and was last seen winning the Group 3 WA Champion Fillies’ Stakes (1600) on November 13.

This is a notable rise in grade for the three-year-old, but she looks well-suited to 1800m and drops from 55.5kg to just 50kg on the weekend.

The other standouts chasing an upset include Dan Morton’s four-year-old Written Tycoon mare Kissonallforcheeks ($15) coming off a third in the Railway Stakes and fourth in the same key lead-up Notorious One ($21).