Trainer John O’Shea is hoping for a consolation prize at Newcastle Racecourse on Saturday with his in-form sprinter Lost And Running, The Everest contender lining-up as favourite in the 2021 The Hunter. 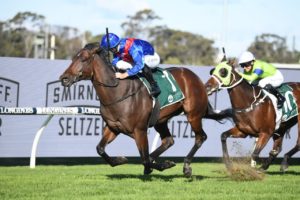 The Everest graduate Lost And Running is favourite to win Saturday’s 2021 The Hunter at Newcastle. Photo: Steve Hart.

Two back Per Incanto five-year-old was very good at a big price when only two lengths fourth behind Chris Waller’s champion Nature Strip in the $15 million The Everest (1200m).

Lost And Running franked that form next-up when runner-up to Eduardo in the $1 million Classique Legend Stakes (1300m), a run he is tipped to go one better than at Newcastle this weekend.

Despite carrying the 59kg top weight in the $1 million The Hunter (1300m), the lightly-raced gelding is firm $3.30 favourite in markets at Ladbrokes.com.au.

A winner of six of his 11 starts to date, Lost And Running hasn’t won since the Listed Luskin Staar (1300m) at Rosehill back in May.

He may be winless this prep, but he’s been racing against the country’s best sprinters and presents fit against an easier grade of rivals on Saturday.

Still, this won’t be a walk in the park for the well-backed favourite with Lost And Running giving the weight away in the quality handicap.

Jockey Hugh Bowman retains the ride and will also need a touch of luck from the wide barrier, the favourite drawn 17 which could become 14 if all the emergencies come out.

The danger occupying the second line of The Hunter betting at $5 is the Annabel Neasham-trained Top Ranked paying $5 to win his Australian race debut.

The Melbourne Cup Carnival’s most winningest jockey in history, James McDonald has the ride on the Irish-bred Dark Angel entire looking to cap off a sensational spring headlined by his Melbourne Cup victory on Verry Elleegant.

Back in Sydney for The Hunter ride on Top Ranked, McDonald and his mount are drawn barrier seven as the horse runs for the first time since a fourth at Ascot in the UK’s Group 2 Summer Mile (1600m) back in July.

Despite a capacity field, just one other horse is currently at single-figure The Hunter odds with Bandersnatch ($6.50) for Hawkes Racing.

Tommy Berry comes aboard the Casino Prince five-year-old who runs first-up from barrier eight chasing a second win at the track having won a maiden by five lengths at Newcastle back in May of 2019.

A dual Black-Type winner in the winter having won the Civic Stakes – Winter Stakes double over 1400m in Sydney, Bandersnatch looks well positioned for a big first-up run over 1300m carrying 57kg.

Of the longer-priced The Hunter horses the others considered the most likely to score an upset include the Gai Waterhouse & Adrian Bott-trained Dawn Passage ($13), rails-drawn Gem Song ($14) for Kris Lees, Classique Legend Stakes third placed Standout ($16) and Bjorn Baker’s perennial placegetter Prime Candidate ($16) coming off three straight thirds this time in.

The Hunter 2021 is set to run as Newcastle Race 8 at 4:40pm (AEDT) on Saturday with full markets courtesy of Ladbrokes.com.au available here.