The James Cummings-trained Willowy donning the iconic Royal Blue of Godolphin gave Damien Oliver a record equalling seventh victory in the Kennedy Oaks 2021 results with her narrow victory on the quick back-up at Flemington on Thursday. 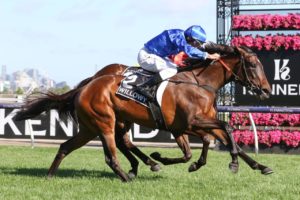 The nicely-bred daughter of Kermadec took her record up to three wins from six starts in her Group 1 debut, the progressive Willowy saluting for the punters as the $3.70 favourite in the $1 million Kennedy Oaks (2500m) on the third day of the Melbourne Cup Carnival.

Oliver celebrated yet another close elite level success this season, the master hoop of tight finishes posting his incredible seventh win in the race and his third on the trot after recent victories aboard Miami Bound (2019) and Personal (2020).

He now sits equal top of the VRC Oaks jockeys’ list along with Bobby Lewis.

Willowy put the writing on the wall on Derby Day winning the Group 2 Wakeful Stakes (2000m) in her Black-Type debut and franked that form just five days later in the Oaks.

There was nothing in this year’s Oaks finish with Willowy just nudging out the Patrick Payne-trained 20/1 outsider Douceur to win, with the Ciaron Maher & David Eustace-trained Biscayne Bay ($4.20) a further two lengths back third.

Third in the Wakeful at a similar price last time out, No Nay Never filly Douceur was in front on the home straight before Oliver came with a late run out wide reeling in the brave leader to steal the Oaks victory in the final stride.

“I thought the second horse had us cold inside the 200m. I tried everything, maybe I took the riding to another level, I don’t know,” Oliver told Racing.com after the tense win.

The late-lunging effort from Oliver saw him take out his 126th Group 1 success and third for the Cup Carnival after his Derby Day double on Colette (Empire Rose Stakes) and Superstorm (Kennedy Cantala).

It was the first Oaks’ victory for Cummings who was excited about the upside of this filly who looks to have a huge upcoming autumn campaign next year.

“She reminds me a lot of Faint Perfume (prepared by Cummings’ grandfather Bart), who won this race back in 2008. You’d have to think next preparation she’s got a lot left in her,” he said post-race.