He’s the horse all the punters are out to see in today’s Group 1 $8 million Lexus Melbourne Cup (3200m) and there is now a bit of value on Incentivise out to $3 in the latest Melbourne Cup 2021 odds. 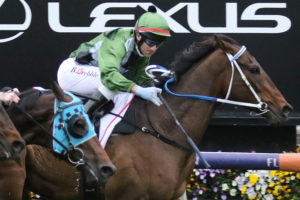 Incentivise is out to $3 in 2021 Melbourne Cup betting markets this morning. Photo: Ultimate Racing Photos.

After getting in as short as $2.25 in post-field betting on the 161st edition of the ‘race that stops a nation’ through Ladbrokes.com.au, Peter Moody’s stable ace is now at a more backable price to post his 10th win on the trot.

A Queensland expat like his trainer, Shamus Award five-year-old Incentivise has won three Group 1s this campaign in Melbourne and was last seen blowing his rivals away by over three lengths in the Group 1 Caulfield Cup (2400m).

Just 11 before him and none since Ethereal (2001) have backed off a Caulfield Cup victory to win the Melbourne Cup in the same year, but in a field that tails off talent-wise this season this horse looks a huge hope to be the next.

CAN INCENTIVISE SALUTE FOR THE PUNTERS IN THE MELBOURNE CUP 2021 RESULTS? CLICK HERE!

The punters are not shying away from Incentivise winning exactly, but there are a few notable Melbourne Cup betting market moves ahead of the famous Flemington Race 7 at 3:00pm (AEDT) as outlined below.

Comes into barrier 15 after the Future Score scratching which looks perfect. The only queries are whether he will get the two miles (he should) and if something like Spanish Mission runs an absolute bolter out of Europe.

He was shorter before the injury concerns, but has been passed fit to run. With RV so diligent this year about horse fitness, it is hard to see them letting this Andrew Balding-trained star from the UK run if he were not up to it. Did the hullabaloo interrupt the lead-up too much? We’re going to find out shortly. If the leg is okay and the Good (4) is not too firm, this horse has had some incredible runs against top class rivals overseas and could lap them should Incentivise not live up to the hype.

This is your genuine Melbourne Cup market mover over the past few days. The money has been flying in for the Anthony & Sam Freedman-trained Delphi to win from gate three with Damien Oliver – oh so good on Derby Day bagging a Group 1 mile double here – in the saddle. 50% winning strike-rate from just 10 starts with plenty of upside for this lightly-raced Galileo entire. Won up to 2816m ahead of his first go at Flemington. Stylish win two back in the Herbert Power Stakes – always a good form line into the Cup – and the Caulfield Cup 13th is forgivable from the wide gate with zero luck in the run. It’s not often a horse atones for a heavy loss like that to win the Melbourne Cup, but the punters are saying that’s a possibility this year.

Another outsider they’re keen for on race day is Pondus.  Another racing for seven-time winning owner Lloyd Williams, this six-year-old has the inside alley with Rachel King riding. King is out to join Michelle Payne as the only Melbourne Cup winning female jockeys. Payne won on Prince Of Penzance in 2015 from…barrier one! Could that be a sign? Former stablemate to Twilight Payment in Ireland, his form in Ireland was solid and he’s fit third-up here after a close fourth in the Moonee Valley Cup.

One of four in the line-up for the flying Maher/Eustace training combo, this Jakkalberry entire is the right age to win a Cup as a four-year-old. He’s a triple Derby champion but hasn’t won since the Group 1 SA Derby (2500m) in May. This prep his form has been far more miss than hit with three big losses – all behind Incentivise in the Makybe Diva (9th), Turnbull (5th) and Caulfield Cup (17th). The money move on him is surprising and cannot see this horse challenging even when at his peak especially with 54kg in a race full of lightweights this year.

Whether you’re backing the favourite, following the market moves or tipping the rank outsider in today’s Melbourne Cup field make sure you lock in the right price online now at Ladbrokes.com.au!