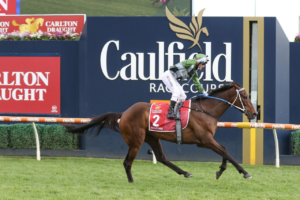 While the stable is reportedly happy with barrier 16 for Incentivise, the last start Caulfield Cup winner has eased out from $2.30 to $2.40 in the updated Melbourne Cup odds at Ladbrokes.com.au.

He overcame barrier 18 to win the Caulfield Cup last time out however and with Brett Prebble in the saddle again, the former Queenslander looks every chance to become history’s 12th Caulfield Cup – Melbourne Cup double winner in the same year.

Twilight Payment jumped from barrier 12 (of 23) to win last year’s 160th edition of the two-mile classic, Joesph O’Brien’s Irish raider returning to defend his title from gate two with Jye McNeil back aboard.

Barrier 18 is the hoodoo gate and only alley yet to produce a Melbourne Cup winner and this year it is No. 24, Sir Lucan on debut down under for Gai Waterhouse & Adrian Bott, looking to be the first.

Historically since official barriers were introduced into the great race, barrier five has produced the most Melbourne Cup winners with eight – the latest being Fiorente (2013).

Barrier five belongs this year to The Chosen One, the New Zealand-trained stayer having a third shot at the title on the back of his fourth in last year’s Melbourne Cup results.

The other international horse in the Melbourne Cup field along with Twilight Payment, Spanish Mission was passed fit to race at the eleventh-hour and is drawn barrier 14 with Craig Williams aboard.

Trainer Chris Waller made the call to accept with his nine-time Group 1 winning mare Verry Elleegant, seventh to Twilight Payment last year, and she suffered an early blow after drawing barrier 19.

Could the Melbourne Cup barrier draw be an omen for jockey Rachel King whose mount, Pondus, drew the inside alley in gate one?

The first and to date only successful female Melbourne Cup jockey Michelle Payne won from barrier one on Prince Of Penzance in 2015 and King is out to emulate that feat.

Formerly with Joseph O’Brien in Ireland, Pondus is on one of the Lloyd Williams-raced runners in this year’s race with the goliath owner chasing an incredible eighth victory.

Pondus now resides with Robert Hickmott and is at $34 to win the Melbourne Cup third-up down under.

The extreme outside barrier (24) was drawn by Waller’s Sydney Cup winner Selino and hasn’t produced a winner since 1973.