The barriers are set for Saturday’s Group 1 $5 million Ladbrokes Cox Plate (2040m) at The Valley with stablemates Zaaki and Mo’unga to jump from barriers six and four respectively, while Godolphin‘s star three-year-old Anamoe has the outside barrier 10 draw. 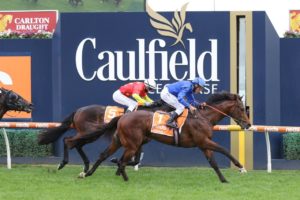 Annabel Neasham had the choice of the first draw and selected barrier four for her gun four-year-old Mo’unga who will be ridden by Hugh Bowman of Winx fame.

Sunline for one of her two and the mighty Makybe Diva both won the Cox Plate from gate four and first-up Winx Stakes winner Mo’unga presents as a lovely chance at a nice price.

His star stablemate Zaaki will jump on his outside with the stable opting to start him from barrier six after still having the opportunity for inside alleys giving jockey James McDonald options early.

Zaaki may have gone down in a surprise defeat last time out in the Group 1 Caulfield Stakes (2000m) running third when his winning streak ended, but he remains favourite in Cox Plate betting at race sponsor Ladbrokes.com.au to atone.

The ill-fated Sir Dragonet who sadly broke down in trackwork last Saturday jumped from barrier six to win last year’s Cox Plate and Zaaki will be looking to go back-to-back from the gate in his honour this season.

Chris Waller is after a fifth Cox Plate trophy to add to the mantle following his historic four-peat with Winx (2015-18) and has nine-time Group 1 winning mare Verry Elleegant in barrier nine with Damian Lane retaining the ride.

For the first time in her career the Zed six-year-old finished outside the trifecta in a Group 1 when fourth to Incentivise in Flemington’s Group 1 Turnbull Stakes (2000m).

The Turnbull Stakes form was well and truly franked last weekend with the winner Incentivise taking out the Group 1 Caulfield Cup (2400m) by 3.5 lengths, a race Verry Elleegant saluted in last year.

On her inside from gate eight is the sole international raider outside of the southern hemisphere in this year’s line-up with the State Of Rest for dual Melbourne Cup winning Irish horseman Joseph O’Brien and jockey John Allen has the ride.

The inside alley belongs to the Peter & Paul Snowden-trained Captivant for hoop Dean Yendall who is the other three-year-old colt in the mix along with Anamoe looking to officially be the first three-year-old to win since the maiden Shamus Award (2013).

Winner of the Group 1 Champagne Stakes (1600m) as a juvenile, Capitalist was good when a half-length second to Anamoe in the Caulfield Guineas last time out but remains at long odds to turn the tables at WFA on Saturday.

On his outside in gate two is the European import Gold Trip having his Australian race debut with Damien Oliver to ride.

Northerly (2001) and Shamus Award (2013) are the latest Cox Plate winners to jump from barrier three.

New Zealander Callison Mav having its final start for John Bary before heading to the stables of Danny O’Brien has been given barrier five, one inside the favourite for jockey Luke Nolen.

The Atlante five-year-old adds another element to this season’s Cox Plate field having won dual Group 1 races in the lead-up across the Tasman at Hastings.