The inaugural field of fillies and mares facing off in this Saturday’s $2 million The Invitation (1400m) at Royal Randwick has been locked-in with the Matthew Smith-trained Tricky Gal securing the final spot. 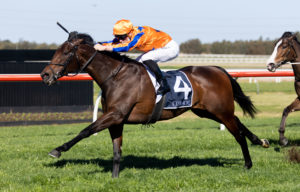 Entriviere is favourite to claim the opening edition of the $2 million The Invitation this weekend in Sydney. Photo: Martin King.

Twelve of the country’s premier female gallopers will do battle for a $1 million winners’ cheque in the opening edition of The Invitation race including Magic Albert six-year-old Tricky Gal who hasn’t won since September last year.

She has been competitive in plenty since however and a perennial runner-up in Group races including her first-up second to Minhaaj at the track in the Group 3 Nivison on October 9.

The updated The Invitation odds at Ladbrokes.com.au are firmly led by the New Zealand raider Entriviere from the Cambridge stables of star young Kiwi trainer Jamie Richards.

She won the Group 2 Sheraco Stakes (1200m) at Kembla Grange first-up before running only three-quarters of a length away third to Vangelic in the Group 2 Golden Pendant (1400m) at Rosehill in late September.

The Golden Pendant winning Vancouver four-year-old Vangelic for Waterhouse and Bott is also in the mix on Saturday.

She has had eight Randwick starts for four placings but no wins, something the latest The Invitation betting markets have her at a generous $11 quote to change.

Following on from her Golden Pendant victory, Vangelic was disappointing against the boys in Randwick’s $500,000 Silver Eagle (1300m) finishing second last (12th) to Aim and is after atonement this weekend back against her own kind.

After the short-priced favourite, there are only two other mares under $10 to win the country’s newest Special Condition race including Icebath at $7.

The bookies are taking no chances with Brad Widdup’s Sacred Falls five-year-old despite a string of recently unplaced runs.

Icebath was excellent at 20/1 in the autumn when runner-up to Cascadian in the Group 1 Doncaster Mile (1600m) and also placed first-up when third to Private Eye in the Group 3 Show County Quality (1200m) in August.

She was far from disgraced when under two lengths beaten finishing fifth to Chat next-up in the Group 2 Theo Marks Stakes (1300m) and, in a tight finish, was just a length away fourth in the Golden Pendant results behind Vangelic.

Icebath was last seen running a mid-field ninth, again only a shade over three lengths behind Private Eye, in the Group 1 Epsom Handicap (1600m) and will relish a drop in distance and grade for The Invitation.

Rob Heathcote’s Star Turn filly Startantes ($9) rounds out the single-figure fancies, the youngster coming in as a winner of five of her 10 career starts to date.

She took on the best of her age for a credible sixth under three lengths off In The Congo at big odds in the Group 1 Golden Rose (1400m) on September 25 and was last seen racing at the highest level again when third just two off Never Been Kissed in the Group 1 Flight Stakes (1600m).

Startantes may be against the older mares on Saturday, but she is very well positioned at set weights plus penalties getting in on just 52kg.

Of the longer-priced runners the value could like in the likes of returning Group 1 Australasian Oaks winner Media Award ($17) and the John Thompson-trained Sweet Deal ($16).

Stay tuned for The Invitation barrier draw to be conducted shortly, with current markets courtesy of Ladbrokes.com.au available in full here.