A quick back-up into the $5 million Ladbrokes Cox Plate could be on the cards for Godolphin’s classy mare Colette who returned to winning form with a soft win in Saturday’s Tristarc Stakes 2021. 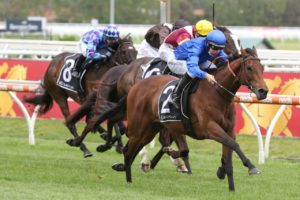 The James Cummings-trained daughter of Hallowed Crown had been targeting a Group 1 Caulfield Cup bid over the mile and a half, but a foot abscess saw the team have to freshen her up and rely on her residual fitness in ‘Plan B’ – the Group 2 $300,000 Tristarc Stakes (1400m).

It proved a winning move as the five-year-old settled at the back of the field before charging home down the outside in an easy win down in grade off two lead-up Group 1 runs just out of the money in Melbourne.

“She had the preparation for the Caulfield Cup,” Godolphin representative Sean Keogh told the media post-race.

“We felt like the residual fitness would up hold today and it was great to see her pull it off.

“She was first-up last preparation beating the best mare in the country (Verry Elleegant).

“So, with the freshness…down in grade…she truly showed her class like the Group 1 mare that she is.”

She had previously run sixth in the Group 1 Memsie Stakes (1400m) to Behemoth and fifth to Caulfield Cup favourite Incentivise in the Group 1 Makybe Diva Stakes (1600m) on Good (4) tracks before finally getting conditions to suit in the Tristarc.

Jockey Damian Lane was happy to have her at the tail end of the field around home turn before hitting the button on the straight.

While the mare was a little flat footed early, Lane was able to get Colette onto the back of the progressive Ciaron Maher & David Eustace-trained Steinem.

Once she got to the outside on the straight, Colette responded well running on and drawing clear to salute by a length in an eye-catching last-to-first performance.

In third rounding out the trifecta was four-year-old Dissident mare Aidensfield.

It was a nice consolation prize for last year’s Golden Eagle winner who delivered as expected and could potentially race at Moonee Valley Saturday week in the Group 1 www.races.com.au/races/group-1/cox-plate/ (2040m).

“She is still in a Cox Plate and she is definitely fit enough to get a mile and a quarter…she’s well placed as well,” Keogh said.

“But we’ll leave that up to James and the team.”

If not the Cox Plate, the mares’ only Group 1 $1 million Empire Rose Stakes (1600m) at Flemington on VRC Derby Day, October 30, looks another nice option.

Red Tracer (2013) was the last mare to complete the Tristarc Stakes – Empire Rose (then Myer Classic) double and markets at Ladbrokes.com.au on Colette to be the next have her as the new $4.50 favourite.