A terrific late run by Art Cadeau set the crowd alight on The Everest Day as the galloper ran down and defeated the 2019 champion Handle The Truth in a thrilling edition of the 2021 The Kosciuszko. 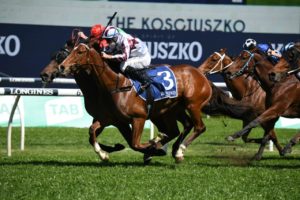 Art Cadeau saluted for the punters in a thrilling 2021 The Kosciuszko result at Randwick on The Everest Day. Photo: Steve Hart.

As the crowds retuned to Royal Randwick for one of the world’s biggest days of racing, they were rewarded early in a scintillating entrée to the main event with the country gallopers facing off in the $1.3 million The Kosciuszko (1300m).

“It is a wonderful feeling to be here. He is just a super horse. For Mick (Lill), you must have the greatest smile on your face. He has been a trainer, he bred this horse and it is a great result for him, my staff and my family,” Robinson told the media post-win.

The horse was two-from-two at the track ahead of The Kosciuszko and did not disappoint taking out the big prize first-up with Tommy Berry continuing associations.

“Can we talk about the crowd first. We are back at Randwick. It’s so good having everyone here,” a happy Berry said after the victory.

Berry also rode Art Cadeau last time out during Randwick’s ‘The Championships’ in April when the galloper won the $500,000 Country Championships Final over 1400m.

“It’s Tommy and the horse. I’m just so proud of them.

“Tommy has been fantastic, he’s been a great friend. I’ve got to give a great wrap to my staff too.

“I had a bad fall six weeks ago and my brother has actually ridden the horse most of his work since then.”

He added to his very healthy stakes fresh taking home a $685,000 first prize for connections in The Kosciuszko.

The ultra-consistent winner also denied  Keith Dryden-trained Handle The Truth a second win who looked the winner getting a gun run the rails until being run down the closing stages.

It was Ice In Vancouver quick out to take up a comfortable lead early on, before the three-year-old Nadajara went forward to hit th front on the outside.

Also up on speed were the two horses that went on to run the quinella, Handle The Truth tracking third and Art Cadeau in fourth.

The 2019 champion took the lead at the top of the straight, but Berry was coming off heels and started with his run aboard the first-up challenger.

Art Cadeau went up to Handle The Truth and nailed him right on the line as the crowd roared, while Spiranac ran third.

“He felt strong all the way through,” Berry said of the winner.

“He’s got that attribute that he wants to lay on his rivals when he gets close to them.

“I think Terry’s training performance to get him to the Championships was better as he had so many issues. I spoke to Terry yesterday morning. He said I couldn’t have him any better.”