The Ciaron Maher & David Eustace-trained Grand Promenade is into the Group 1 $7.75 million Lexus Melbourne Cup (3200m) winning a ballot free ride into the ‘race that stops a nation’ via the 2021 The Bart Cummings at HQ on Turnbull Stakes Day. 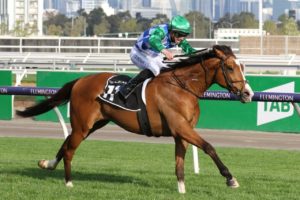 Grand Promenade is into the 2021 Melbourne Cup field after winning the Group 3 The Bart Cummings. Photo: Ultimate Racing Photos.

Last Melbourne Spring Racing Carnival the stable took out the Group 3 The Bart Cummings with Persan who went on to run a brave fifth over the two miles on the first Tuesday of November.

Twelve months on and it is Grand Promenade’s turn after the Champs Elysees six-year-old continued his lovely Flemington record to win the $750,000 The Bart Cummings over 2520m thanks to a perfectly-timed ride by John Allen.

Now three-from-five at the track, the dour stayer enjoyed his first victory since saluting by a big margin with more weight in the Banjo Paterson Series Final (2600m) during the winter.

Excellent over the 2000m at Caulfield when finishing a brave fifth in the Naturalism Stakes last time out, he relished the step-up in distance and was good late hitting the line strongly in The Bart Cummings.

Allen had the eventual winner up on the speed throughout settled third behind the leader Pondus who set a quick pace up front.

Pondus was still leading 500m out before Grand Promenade got into the clear and gave a good kick to join the front-runner at the 300m with the two going toe-to-toe.

Inside the final furlong Grand Promenade hit the lead, the winning margin worn down by Tralee Rose who kept coming.

The Symon Wilde-trained mare Tralee Rose ($7.50) crossed brave second in a wonderful potential Spring Cups’ lead-up, while the Hawkes Racing-trained Master Of Wine ($51) made up plenty of ground to finish a shock third at huge odds with the fit and locally-trained horses running the trifecta.

Maher & Eustace continued their dominant record in the Victorian staying races and look to have a genuine lightweight chance in the Melbourne Cup with Grand Promenade getting into the classic with just 51kg.

“He’s the right horse for it he’s a proper two miler I was wrapped they ran a decent temp today,” co-trainer Maher told the media post-race.

“He’s been up and racing all year.

“Johnny Allen was probably a 10/10 ride. He’s just a phenomenal jockey and he’s in good form.

“Very similar (to Persan). Just been spacing their runs and a little freshen up here and there.

“It’s great when a plan comes off.

“Onward and upwards to the next plan.”

Almandin (2016) was the last horse to complete The Bart Cummings – Melbourne Cup double.

All-in Melbourne Cup 2021 odds online at Ladbrokes.com.au on Grand Promenade to be the next are into $13 and are available in full here.