The Gai Waterhouse & Adrian Bott-trained Entente was good third-up and fit on the improve in Saturday’s 2021 Colin Stephen Quality results ahead of a potential seven day back-up into the Group 1 $750,000 The Metropolitan (2400m). 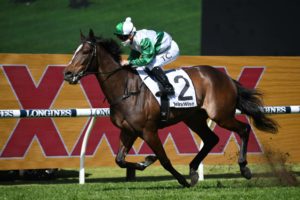 Entente was excellent winning the 2021 Colin Stephen Quality ahead of a potential Group 1 The Metropolitan run. Photo: Steve Hart.

The five-year-old Dundeel gelding was last seen running third at huge odds behind She’s Ideel in the Group 3 Kingston Town Stakes (2000m) and relished a rise in distance up to a mile and a half on Golden Rose Stakes Day.

The galloper went up a half-kilo in weight but was too strong late taking out the Group 3 $160,000 Colin Stephen Quality (2400m) thanks to a perfectly timed run by jockey Tim Clark.

Up front doing it tough into the headwind after charging to the front mid-race was the Bjorn Baker-trained grey Fun Fact.

Torrens led the field early after really working hard to lead, with the Mark Newnham-trained Skymax also up on speed throughout.

The field really strung out by the half-way point with Fun Fact taking up a clear lead, Skymax coming off the fence to go with them.

Fun Fact was still in the lead on the turn onto the home straight, before the challengers came.

Entente responded beautifully to Clarke’s urgings coming right down the outside with the Matthew Smith-trained Dick Wittington coming with him.

Those two headed off Fun Fact inside the final furlong, Entente drawing clear to charge home in an eye-catching victory for the punters.

Showing huge improvement making-up all the ground from last to second in a brilliant late run was eventual runner-up Young Rascal for Richard & Michael Freedman, while Fun Fact was so gallant holding on to run third and round out the trifecta.

Entente also secured a ballot exemption for Saturday’s week’s 2021 The Metropolitan where he will get the chance to complete the double for the first time since Railings (2005).

All-in The Metropolitan betting at Ladbrokes.com.au has Entente at $18 and are available in full here.