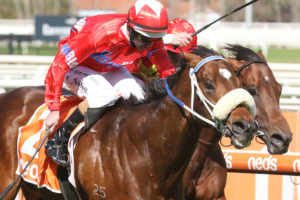 Getting the youngster fit and ready for his shot at the $2 million Caulfield Guineas over a mile on October 9 has always been the ultimate goal for the stable, and Moody had the horse in fine order on Sir Rupert Clarke Stakes Day.

Winner of the Group 2 VRC Sires’ Produce Stakes at the 1400m at Flemington in the autumn, Lightsaber was never expected to win his two earlier lead-up runs this time in when sixth in the Group 3 Vain Stakes (1100m) fresh and fourth only a length beaten in the Group 3 HDF McNeil Stakes (1200m) last time out.

Getting up in distance at the same track in the Group 3 $300,000 Caulfield Guineas Prelude (1400m) today and Lightsaber was always going to take some beating.

Jockey Luke Nolen timed the eventual winner’s run to perfection allowing him to move up and settle second, controlling the race from outside the speed.

The favourite Alpine Edge was fast out from the inside alley before being eased back to third on the fence as the Annable Neasham-trained Military Expert, coming off a Group 3 Ming Dynasty Quality second at Kembla Grange, led the field around at a moderate tempo.

Lightsaber slipped up into second on the front-runner’s outside perfectly positioned, while James Cummings’ Astern colt Brigantine travelled around in fourth before peeling out to sit three-wide in third.

That forced Alpine Edge back on the rails where he was going to need luck to get out and feature in the finish.

Jockey Craig Williams tried to get off the fence aboard the Toby & Trent Edmonds-trained Queenslander, but the run didn’t come.

Instead, it was all eyes on Lightsaber who held on off that excellent run to salute and beat Brigantine in the Royal Blue of Godolphin with the leader Military Expert in third.

The first four around the turn were the first four over the line as Alpine Edge finished just out of the trifecta.

“We really look forward to being back here in a few weeks’ time for the Guineas.

“He’s the clear and present number one seed (for the stable).”

Moody took out the Prelude – Guineas double back in 2010 with Anacheeva and looks to have a genuine hopeful in Lightsaber to be the first since Helmet the following year (2011) for Peter Snowden to win both events.

All-in 2021 Caulfield Guineas betting at Ladbrokes.com.au – available in full here – has Lightsaber at a current quote of $21, which is expected to firm following his performance in the Prelude.