Joe Pride’s last start WJ McKell Cup winner out of Sydney, Stockman, is tipped to enjoy another winter cup win when heading to the Sunshine Coast on Saturday for the 2021 Caloundra Cup. 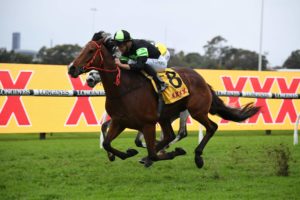 A quality field of eleven stayers do does battle in this season’s Listed $175,000 Caloundra Cup (2400m) and it is the in-form Tavistock four-year-old Stockman at short odds to win.

The progressive gelding is at $2.25 and firming in Caloundra Cup betting online through Ladbrokes.com.au with plenty of time for talented hoop Ryan Maloney to get the job done for the punters from out wide in gate 10.

Stockman has been racing in top form in Sydney this prep when third two back behind Knights Order in the Listed Winter Cup (2400m) before his Listed WJ McKell Cup (2000m) win on a Heavy (8) at Rosehill on June 19.

He is back up to the mile and a half this weekend, which he boasts three minor placings from four previous runs over, and with rain around in Queensland he might just get another suitable wet track.

There were excuses after a slow start and interference in the Winter Cup so with another good run Stockman looks the horse to beat in the Caloundra Cup.

The danger occupying the second line of betting at Caloundra Cup odds of $6 is the WJ McKell Cup third placegetter Parry Sound.

Bjorn Baker’s Pierro five-year-old comes via the same Sydney lead-up form as the Caloundra Cup favourite and is out to turn the tables on his last start conqueror over further in the rematch this weekend.

A perennial placegetter having run second or third in his five latest starts, Parry Sound was runner-up in the Winter Cup two back before crossing nearly four lengths third in the McKell Cup.

He drops a half-kilo carrying just 54kg here, has a solid 2400m record (6:1-3-0) and has form on Good – Heavy tracks so can handle all conditions making him a livewire chance here.

Close third elect at $6.50 is then the Chris Waller-trained Wu Gok out to hand his trainer with a second Caloundra Cup triumph following Index Linked in 2015.

Heavier in the weights with 58kg, the Sebring seven-year-old has his 52nd career run and is also coming off the Winter Cup (4th) – McKell Cup (6th) lead-in.

He carted 59kg last time out when well beaten, but meets Stockman better weight-wise here and can put in a good run at 2400m.

A recent winner from late May carrying a big weight to victory at this track over 1000m, there’s some queries about the distance for the Lucas Cranach five-year-old.

To date Flash Aah’s longest-distanced win is 1800m, but he looked a staying type last time out when only a half-length off the winner Happy Go Plucky in the Listed Ipswich Cup (2150m).

Ipswich Cup winner Happy Go Plucky meanwhile is at $10 to do the double jumping from barrier eight with the in-form Stephanie Thorton aboard.

The Caloundra Cup 2021 is set to run as race seven on Saturday’s Sunshine Coast race card at 4:40pm (AEST) with full markets on the event available here courtesy of Ladbrokes.com.au.