Queensland horseman Tony Gollan celebrated a huge result in the Kingsford-Smith Cup 2021 at Eagle Farm with his horses Vega One and Jonker running a Group 1 quinella. 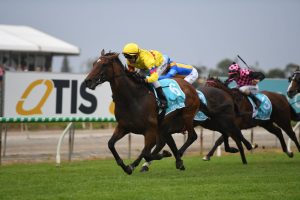 Vega One (pictured at the Gold Coast) scored an upset win in the 2021 Kingsford-Smith Cup. Photo: Steve Hart.

The former Toowoomba-based trainer now calls Brisbane home and enjoyed his fifth career Group 1 with an upset in this year’s $700,000 Kingsford-Smith Cup (1300m) thanks to a brilliant ride by champion female hoop Jamie Kah.

“To run one-two in a Group 1 here at home, and this is home now, is just fantastic,” Gollan told Sky Thoroughbred Central after the race.

The galloper broke down badly after his fourth in last year’s Group 1 Stradbroke Handicap (1400m) and was sent to Victoria to undergo rehab.

After much work and patience, Vega One returned this April and has been racing in excellent fashion including a second in the Group 2 Victory Stakes (1200m) and last start fourth when under a length beaten in the Group 1 Doomben 10,000 (1200m).

Up to the 1300m, fit fourth-up and on a Good track he was too good for his rivals even after getting checked in a vital stage on the straight.

Kah never panicked despite finding herself behind a wall of horses the final furlong, instead sneaking out into a gap on the outside and flashing home out of nowhere to deny the fellow Gollan-trained Jonker who nearly went all-the-way after leading the field around.

“I’m so proud of these horses.

“He (Vega One) had a major injury last year after the Stradbroke. They rehabbed him really well down in Victoria.

“I didn’t know where to look. I thought Jonker was going to hang on.”

The runner-up, Spirit Of Boom entire Jonker, was having his first run since a third to subsequent Doomben 10,000 champion Eduardo in Sydney’s Group 1 The Galaxy (1100m) on March 27 and further franked that form with his brave second.

In third rounding out the Kingsford-Smith Cup trifecta was the Peter & Paul Snowden-trained Signore Fox towards the inside, while the Godolphin-raced Trekking ran a strong fourth after looming as a danger late down the outside.

Gollan suggested that they could go around again with Vega One in the $1.5 million Stradbroke Handicap back at the track on June 12.

“It was a long-range mission to get here and into the Stradbroke again with him,” he said.

“We’ve had a torrid time with him this prep…so it’s just amazing.

“We were on a knife’s edge whether we were even going to be here this week, with just a million little things going wrong.

“The horse did a great job.”