The punters are coming for the Joe Pride-trained Eduardo to secure another elite level win with the star sprinter into odds-on territory in 2021 Doomben 10,000 betting in Brisbane this weekend. 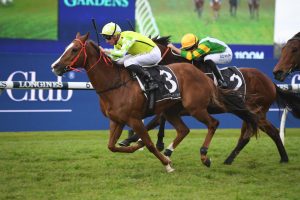 Eduardo is into odds-on territory in Doomben 10,000 betting this weekend. Photo: Steve Hart.

The Doomben 10,000 field features a quality eleven-horse line-up dominated by recent The Galaxy winning seven-year-old Eduardo who is at $1.95 to return to winning form through Ladbrokes.com.au.

Tuesday afternoon’s Doomben 10,000 barrier draw saw the Host gelding come up trumps with gate six and he will be ridden by Nash Rawiller who won the race back in 2003 aboard Bel Esprit.

Rawiller guided Eduardo to victory back-to-back to kick off his autumn in Sydney taking out the Group 2 Challenge Stakes (1000m) and the Group 1 The Galaxy (1100m), the latter when the horse carried the 57kg top weight to a huge three and a half-length victory.

At his last start the galloper was far from disgraced when third to Nature Strip in the Group 1 TJ Smith Stakes (1200m), and he is the deserving favourite this weekend at the short price.

Trainer Peter Snowden chases a fourth Doomben 10,000 success and his second in partnership with his son Paul with the stable saddling-up the $5 second elect Wild Ruler from barrier two.

The three-year-old Snitzel colt has eased slightly in the markets despite the near-the-inside alley.

He has won two of his past three starts with a sixth to Eduardo in The Galaxy in between.

At his last start on April 17 at Randwick Wild Ruler won the Group 2 Arrowfield 3YO Sprint (1200m), but he will need to be improving going up in weight to take on the older runners again on Saturday.

It is the James Cummings-trained Trekking that shapes-up as potential value with jockey Kerrin McEvoy in the saddle after his 13th Queensland Group 1 victory and his third in the Doomben 10,000 after early success aboard Epaulette (2013) and Music Magnate (2016).

Street Cry six-year-old Trekking is second-up in the 10,000 looking to atone for his luckless fifth as the beaten odds-on favourite in the Group 2 Victory Stakes (1200m) at the start of the month.

Jockey Hugh Bowman was aboard for that ride, but McEvoy is happy to jump in the saddle for the Group 1 riding Trekking for the first time in a year.

It has been 12 months between wins for the galloper who was in Adelaide securing the Group 1 The Goodwood title on this day last year, and McEvoy believes he can break the drought at good odds.

“After sitting out of the (winter) carnival last year (due to COVID-19) it will be good to get back up there and ride Trekking in the main race, he’s a horse who I have had a bit of luck with,” the three-time Melbourne Cup winning hoop told Racenet this week.

“Anyone who has been criticising him recently is being a bit hard on him I reckon.

“He’s been running in some really good races and it was only 12 months ago he won the Group 1 Goodwood in Adelaide.

“Since then he’s run well in The Everest and some other top-line races.

“I didn’t ride him first-up but he looked like he was travelling like the winner during the run, it just looked as though his run ended on that ground first-up.”