A ballot free ride into November’s $8 million Melbourne Cup field is up for grabs at HQ on Saturday with a class field of stayers engaged in The Andrew Ramsden Stakes 2021. 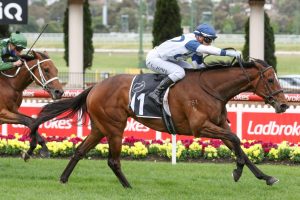 Mark Zahra partners the four-year-old So You Think mare in Melbourne’s feature race of the weekend coming back aboard her for the first time since a close second in last November’s Listed Sandown Cup (3200m) over the mile and a half.

Realm Of Flowers has been good over the autumn including a Group 3 NE Manion Cup (2400m) second at Rosehill and her last start fifth in the Group 1 Sydney Cup (3200m) on April 17 at Randwick.

This shapes-up as an easier grade of rival for her and over the distance with a bit of luck she could be hard to beat.

It’s a close affair in The Andrew Ramsden betting this season with the danger being the Danny O’Brien-trained Group 1 winning Miami Bound ($4.20).

She contested the 2020 Melbourne Cup running 14th and gets the chance to earn another shot at the world’s richest handicap race via a win in The Andrew Ramsden.

The now four-year-old Reliable Man mare has been very strong in Sydney in the lead-up coming off back-to-back Group 1 thirds in the Tancred Stakes and Sydney Cup, plus she’s a two-time winner at Flemington.

The bookies are having a hard time separating the best from the rest in The Andrew Ramsden odds with a host of other runners also at single-figures including the Ciaron Maher & Daivd Eustace-trained trio of: Persan ($4.80), therails-drawn stablemate Grand Promenade ($6) and three-year-old VRC St Leger winner last time out Through Irish Eyes ($6).

Pierro four-year-old Persan is the shortest-priced of The Andrew Ramsden acceptors in the current all-in Melbourne Cup 2021 odds online paying $26, a price sure to firm should he win on the weekend.

He’s a Flemington specialist having won four from seven at the track including last October’s Group 3 The Bart Cummings that led into his credible fifth in the Melbourne Cup behind Twilight Payment when under three lengths beaten at 40/1.