The Joe Pride-trained sprint star Eduardo is red hot favourite to return to winning form in a small 11-horse 2021 Doomben 10,000 field in Brisbane this weekend. 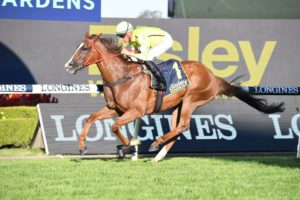 Sitting top of the latest Doomben 10,000 odds at $2.50 through Ladbrokes.com.au is evergreen seven-year-old Eduardo, the Host gelding having his first run at the Doomben track.

After winning the Group 2 Challenge Stakes (1000m) defeating Nature Strip narrowly first-up, he was ultra-impressive at Rosehill on March 27 carrying the 57kg top weight to a commanding three and a half-length win in the Group 1 The Galaxy (1100m).

Eduardo was last seen running third when Nature Strip turned the tables in the $2.5 million Group 1 TJ Smith Stakes (1200m) during ‘The Championships’, a run Eduardo is looking in an excellent position to improve on in the Doomben 10,000.

His The Galaxy winning jockey Nash Rawiller comes back aboard on the weekend looking for his second Doomben 10,000 victory having previously ridden Bel Esprit to victory back in 2003.

Pride has also previously taken on the Brisbane feature back in 2005 with Red Oog when the race was run over 1350m.

The danger on Saturday occupying the second line of Doomben 10,000 betting is Wild Ruler for Peter & Paul Sowden, the three-year-old Snitzel colt coming off a lead-up win from April 17 in Randwick’s Group 2 Arrowfield 3YO Sprint (1200m).

Prior to that the spring’s Coolmore Stud Stakes third placegetter was sixth to Eduardo in The Galaxy, but presents fit fourth-up in the rematch and looks better suited to the 1200m.

Co-trainer Peter Snowden has prepared three previous Doomben 10,000 winners with Beaded (2011), Epaulette (2013) and most recently the mighty Redzel (2017) who he trained in partnership with his son Paul.

Peter Snowden chases his fourth Doomben 10,000 win this weekend saddling-up the youngster Wild Ruler in the field of 11 Bet now with Ladbrokes.com.au

The last of the single-figure hopefuls at $7 is the Godolphin-raced Trekking.

Saturday will be the James Cummings-trained son of Street Cry’s first run at Doomben, but Trekking does have previous strong form in Brisbane.

He ran third in the Kingsford-Smith Cup results of 2019 before taking out that year’s Group 1 Stradbroke Handicap (1400m) at Eagle Farm in impressive fashion.

This time last year Trekking was in Adelaide claiming the Group 1 The Goodwood (1200m) at Morphettville, but connections have opted to keep him on the eastern side of the country this autumn – winter campaign.

First-up the now six-year-old ran fifth in the Group 2 Victory Stakes (1200m) as the beaten odds-on favourite at Eagle Farm on May 1 and Saturday is his chance to atone second-up.

The best out of that now key Doomben 10,000 lead-up backing-up in the Group 1 is the Tony Gollan-trained runner-up Vega One ($15).

Click here for the latest Doomben 10,000 odds on the final field courtesy of Ladbrokes.com.au.