The Annabel Neasham-trained import Zaaki was huge winning the A.D. Hollindale Stakes 2021 on the Gold Coast with ease putting away a class field at just his third start down under on way to the Group 1 Doomben Cup (2000m). 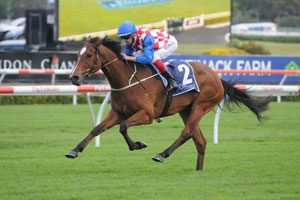 The British-bred six-year-old was well-supported by the punters to take out this year’s Group 2 $500,000 A.D. Hollindale Stakes (1800m) having been dropped back in distance from his lead-up second behind Paths Of Glory at Randwick on April 24 in the Group 3 JRA Plate (2000m).

It proved a winning move by Neasham as Zaaki was given a wonderfully-timed ride on-speed by star Sydney hoop James McDonald.

“Gee, J Mac’s the best for a reason, it was a beautiful ride,” Neasham told Sky Thoroughbred Central post-win when quick to credit James McDonald.

“He (Zaaki) is quite a strong traveller and once he got in that spot, I was quite confident he’d be hard to beat.

Eighty-to-one roughie Tiptronic charged out to lead the Hollindale field around, while Zaaki settled fourth in the run getting a beautiful trail into the race.

The outsider in betting was still in the lead with 600m to go, while McDonald began his move on the heavily-backed favourite getting Zaaki up into third approaching the turn.

Onto the straight it was Zaaki on the outside of the Chris Waller-trained Shared Ambition, before the eventual champion shot clear and charged out to a huge lead over the final furlong.

Absolutely bolting home, Zaaki ($3.60F) still had over two lengths to spare on the line over the fast finishing Fifty Stars ($9) who was good late narrowing the gap from a mid-field run with William Pike aboard.

Waller’s last start Group 3 Neville Sellwood Stakes (2000m) winner – when ridden by McDonald – out of Sydney Shared Ambition ($16) rounded out the trifecta in third with Jim Byrne in the saddle.

Zaaki looks to have a huge future in Australia off the commanding Hollindale win where he easily put away a quality field on what was far from his preferred racing surface.

“Hopefully, if we get a firm track, in the Doomben Cup we might see an even better performance.”

The mare Streama (2014) was the last galloper to complete the A.D. Hollindale Stakes – Doomben Cup double.