The Gai Waterhouse & Adrian Bott-trained Yao Dash is onto the Group 1 $3 million Doncaster Mile (1600m) next week following a runaway victory in the 2021 Doncaster Prelude at Rosehill. 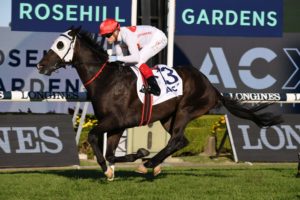 Yao Dash is into the Group 1 Doncaster Mile after an all-the-way win in the Prelude. Photo: Steve Hart.

Sydney’s leading lady of racing Waterhouse will look to add to her strong Doncaster Mile record on Day 1 of ‘The Championships’ at Royal Randwick following the impressive Group 3 $160,000 Doncaster Prelude (1500m) victory by the progressive Yao Dash.

A four-year-old son of Smart Missile, the up-and-coming young talent rose in grade and distance on the back of a win carrying 60kg over 1350m at Rosehill on March 13.

He was excellent over further in the Prelude with Craig Williams aboard, the horse absolutely airborne in his all-the-way win going down to just 53kg.

Yao Dash is a light weight chance again for his acid test in the Group 1 Doncaster Mile with 50kg as he looks to make history as the first horse to do the double.

Williams went straight to the lead on Yao Dash who was one of the first out the gates showing good muster to hit the front.

Leading into the straight, the eventual winner gave a big kick at the 350m finding another gear and opened up a gap on his rivals.

Going great guns the final furlong, Yao Dash ($3.90) led all-the-way and hit the line three lengths ahead of the Chris Waller-trained Mister Sea Wolf with the smartly-ridden Bottega in third from the wide alley.

It was a dominant display from the promising winner who deserves his shot in the 2021 Doncaster Mile for which he’s firmed in from $51 to $21 in the latest all-in markets at Ladbrokes.com.au – available in full here.