Inglis Millennium winner Profiteer is tipped to take out a wet edition of the Golden Slipper Stakes 2021 this Saturday at Rosehill should the action not be called off due to the deteriorating track conditions. 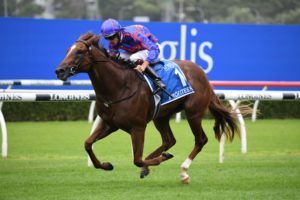 Profiteer is tipped to win a wet edition of the 2021 Golden Slipper Stakes at Rosehilll this weekend. Photo: Steve Hart.

Rosehill is at a Heavy (9) on the eve of the big meeting and with more rain forecast, there is a chance the nine-race card could be postponed.

Drawn in barrier five with last year’s winning hoop Hugh Bowman to ride, the smart Capitalist colt is two from three heading into the Group 1 and out to atone for a last start loss.

Profiteer comes via a run in the Group 2 Todman Stakes (1200m) at Randwick a fortnight back where he went down narrowly to Anamoe as the beaten odds-on favourite.

He gets the chance to atone here in his first run at Rosehill and sits top of the Golden Slipper odds at $3.80 and firming through Ladbrokes.com.au to do so.

Profiteer is yet to race on Heavy going, but his impressive Inglis Millennium victory two back was on a Soft course and he saluted by over five lengths suggesting he can handle the conditions.

Despite the size of this autumn’s Golden Slipper Stakes field just two other runners are currently under $10 for the win with the Richard & Michael Freedman-trained Stay Inside ($5) and John Sargent’s undefeated filly Four Moves Ahead ($5.50) drawn in barriers three and 10 respectively.

Tommy Berry takes over for James McDonald aboard two-time winning Extreme Choice colt Stay Inside who was an impressive four-length victor last month in the Pierro Plate.

He too is a Todman Stakes graduate having run fourth on a Good (4) track after that easy victory on a Soft (7) prior.

Snitzel filly Four Moves Ahead should be able to stay out of trouble from barrier 10 in the Golden Slipper as she chases a third win from as many starts.

Her win on debut was on a Heavy (8) at Randwick’s Kensington track before she won first-up on the course proper there saluting on a Soft (6) to take out the Group 2 Sweet Embrace Stakes on February 27.

With an open race run in testing conditions there could be great value in this year’s Golden Slipper markets including the $11 on offer for late entry, returning Group 1 Blue Diamond Stakes champion Artorius.

Barrier 13 could prove an advantage if the track is messy closer to the inside rail, giving jockey Luke Currie every chance to guide Artorius to victory for Anthony & Sam Freedman.

Sepoy (2011) was the last two-year-old to do the Blue Diamond – Slipper double.

There is an enormous offering of $31 for Chris Waller to win his first Slipper with last weekend’s Pago Pago winner Shaquero out in gate 15, while the Todman Stakes winner Anamoe is at $18 jumping from the outside alley.

Waller meanwhile also has James McDonald riding the Silver Slipper winner Home Affairs ($18) from barrier two, while O’president ($11) chases a third win on the trot for the stable on the back of his Group 2 Skyline success in late February.