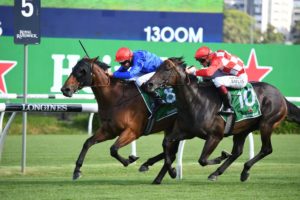 Savatiano held on in a narrow finish to win the 2021 Canterbury Stakes. Photo: Steve Hart.

Markets on this year’s Group 1 $500,000 Canterbury Stakes (1300m) were firmly led by the fellow James Cummings-trained Bivouac ($3), a three-time Group 1 winner, but he only managed to run nearly two lengths back fourth as his stablemate stole the show.

An always-honest daughter of Street Cry, six-year-old Savatiano ($3.80) had a host of Group 2 wins to her name but finally broke through at elite level with jockey Hugh Bowman aboard for the narrow victory.

It was a father vs son battle to the line in the Canterbury as a mare prepared by Cummings’ father Anthony, Mizzy, charged home late to give Savatiano a real fright as a $71 outsider in betting.

Bowman had Savatiano settled nicely third the fence during the run as Samadoubt, racing for the first time in 18 months, took up the lead and Bivouac was three-wide back in the field doing plenty of work going forward.

Approaching the turn Savatiano inched closer to the two front runners, while the favourite was still four lengths off them.

Bowman hit the button early on the eventual winner knowing he was on a quality mare and Savatiano took up the lead 250m out racing away.

In a lovely return to form from five-year-old Zoustar mare Mizzy, the spring’s Golden Eagle third placegetter relished a drop in grade off her Group 1 Oakleigh Plate 11th at Caulfield last start presenting as the late danger.

Her and jockey Regan Bayliss closed the margin to just a nose, just missing out on a blowout result.

After missing the kick by a length, Masked Crusader made up late ground to finish third and complete the Canterbury Stakes trifecta.

With the Canterbury win, Savatiano is now exempt from ballot for both the Group 1 $1 million George Ryder Stakes (1500m) at Rosehill on Golden Slipper Day in a fortnight and the Group 1 $3 million Doncaster Mile (1600m) back at Randwick on Day 1 of ‘The Championships’ in April.