Richard & Michael Freedman have got two, gun youngsters into the $3.5 million Golden Slipper Stakes (1200m) field on March 20 with their progressive filly Glistening winning the 2021 Reisling Stakes to join stablemate Still Inside in the world’s richest race for two-year-olds. 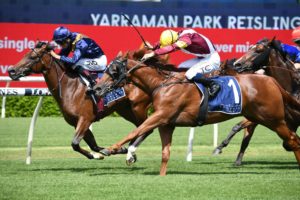 Glistening (inside) held on for an all-the-way win into the Golden Slipper via the 2021 Reisling Stakes. Photo: Steve Hart.

Two-time winning Extreme Choice colt Stay Inside was the hard luck story on Randwick Guineas Day when coming from last to fourth behind Anamoe in the Group 2 Todman Stakes, that performance seeing him move into top-spot in futures Golden Slipper 2021 betting at Ladbrokes.com.au.

One race later and it was the fillies’ turn in the Group 2 $300,000 Reisling Stakes (1200m) taken out in an excellent all-the-way performance by a nicely-bred daughter of Zoustar, Glistening.

She came off a debut run at Canberra from February 19 when runner-up behind Pretty Woman in the Black Opal Preview (1000m) and showed great improvement, relishing the step-up to 1200m in the big city for the Reisling Stakes.

Apprentice Jean Van Overmeire retained the ride on the eventual Reisling Stakes winner and was happy to go to the front to take up the lead after his filly pinged out of the gates.

Glistening led around the turn into the home straight and showed terrific acceleration as a number of rivals made their moves late including the Gai Waterhouse & Adrian Bott-trained Swift Witness.

Swift Witness came out of the pack with a big run, diving right on the line to force a photo-finish, but was a fraction too late and narrowly denied a chance at the Golden Slipper despite her fast-finishing effort.

Glistening on the inside held on to win by a nose, while the Godolphin-raced Trifaccia was the eye-catcher in third with plenty of improvement to come.

The fillies ran a fraction slower time than the boys with Glistening saluting in 1:09.27, while the Todman winner Anamoe won in 1:08.54 thanks to the over-racing front run by Profiteer.

It was the girls who recorded a quicker final sectional however racing home in 33.86 seconds compared to 33.89 in the Todman.

Co-trainer Michael Freedman celebrated his second Reisling Stakes success following on from the exciting down-the-outside win by Frolic in the wet back in 2017.

Frolic went on to run second behind the outstanding filly She Will Reign in that year’s Golden Slipper Stakes results, the event contested on a bog Heavy (10) track.

All-in Golden Slipper odds at Ladbrokes.com.au on Glistening to be the next have firmed in from an incredible $301 to $34.

Unlucky runner-up Swift Witness is in from $34 to $21, but is likely to be balloted out of the final field for the Slipper, while Trifaccia has been left alone at $67.