Godolphin’s big Street Boss colt Anamoe raced into 2021 Golden Slipper contention with a wonderful victory to knock the favourite Profiteer off right on the line in a thrilling edition of the Group 2 Todman Stakes (1200m) on Randwick Guineas Day. 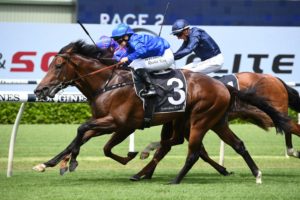 Anamoe was impressive late winning the 2021 Todman Stakes ahead of the Golden Slipper. Photo: Steve Hart.

Godolphin’s big Street Boss colt Anamoe raced into 2021 Golden Slipper contention with a wonderful victory to knock the favourite Profiteer off right on the line in a thrilling edition of the Group 2 Todman Stakes (1200m) on Randwick Guineas Day.

Two-time winning Capitalist colt Profiteer from the Caulfield stables of Mick Price & Michael Kent Jnr was all the rage in Todman Stakes betting this year tipped to remain undefeated after his five-length win in the Inglis Millennium at the track back in early February.

Having been kept fresh over the past month, the still very promising two-year-old was quick out from the inside alley in the Todman and over-raced up in the lead with Hugh Bowman aboard.

He came back to the field as they turned for home and was tackled at the 300m by the likes of Home Affairs and the eventual Todman Stakes winner Anamoe who was given a peach of a ride by Rachel King.

Profiteer dug deep and wasn’t giving up without a fight, but it was the James Cummings-trained Anamoe in those famous Royal Blue silks getting the better run late once the gap opened up down the middle.

Lengthening over the final 100m, Anamoe narrowly won the key lead-up into the Group 1 $3.5 million Golden Slipper Stakes (1200m) held at Rosehill in a fortnight’s time.

The beaten favourite Profiteer held for second and lost few admirers, just needing to learn to settle better in the run ahead of the big grand final.

In third rounding out the Todman Stakes trifecta in another eye-catching Slipper trial was the Chris Waller-trained I Am Invincible colt Home Affairs who came off a win in the Group 2 Silver Slipper Stakes (1100m) to run a cheeky late race here.

The forgive story out of the Todman Stakes results was the fourth-placed Extreme Choice colt Stay Inside who came off a four-length win in the Pierro Plate (1100m) before getting settling last in the Group 2 and making up late ground.

They recorded a very slick 1 minute 08.54 second time in the Todman due to the over-racing of Profiteer in the lead, with a final sectional of 33.89 seconds ahead of the fillies’ turn in the Reisling next race.

Updated Golden Slipper Stakes 2021 odds have Anamoe in from $21 to $8 through Ladbrokes.com.au become the second horse in as many years to complete the Todman – Golden Slipper double following Farnan (2020).

Profiteer has eased out from $4.80 favouritism to $6, with Stay Inside the new Golden Slipper favourite at $5.

Home Affairs meanwhile has been left alone at $19 making him the potential value in futures  Golden Slipper markets.