In a remarkable performance by the 57kg topweight the Mathew Ellerton & Simon Zahra-trained Zoutori continued his brilliant record down the famous ‘Straight Six’ at HQ with a big win in the 2021 Newmarket Handicap on ‘Super Saturday’. 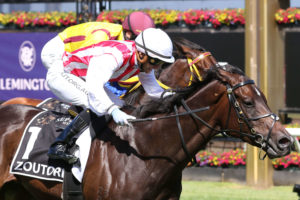 Ridden to victory by this year’s Blue Diamond winning hoop Luke Currie, Zoutori was the sole horse to back-up from last year’s event to take another shot at the Group 1 $1.25 million Newmarket Handicap (1200m).

During the spring the straight track specialist enjoyed back-to-back wins over the 1200m at Flemington completing the Group 2 Bobbie Lewis – Gilgai Stakes double before a brave effort when fourth to Bivouac again in the Group 1 VRC Classic.

He returned on February 20 running seventh to Celebrity Queen and Portland Sky in the Group 1 Oakleigh Plate (1100m) at Caulfield, a race he’d finished second in last autumn, but it was a blanket finish and he was only a length beaten.

Relishing a return to his pet track and distance, Zoutori got a lovely trail into the race chasing Perth visitor Indian Pacific – also by Zoustar – who led the four horses racing up the inside pack.

The rest of the Newmarket Handicap field were on the outside and headed by the dead-heat Oakleigh Plate winning mare Celebrity Queen, before the two sides merged with 500m left to travel.

At the 250m it was still Indian Pacific in the lead, before Zoutori dug deep with the big weight moving up to hit the front and salute in the Newmarket Handicap 2021.

Four-year-old Indian Pacific held to finish runner-up at the track for the second time after his lead-up performance behind Fabergino in the Listed Bob Hoysted Stakes (1000m) on February 27.

The Newmarket Handicap trifecta was rounded out by the third-placed Star Witness colt Amish Boy, the Ciaron Maher & David Eustace-trained three-year-old in great form having run second in both the $2 million Magic Millions 3YO Guineas and Group 2 Autumn Stakes over 1400m in the lead-up.

Winning co-trainer Mathew Ellerton was thrilled with the victory, which saw Zoutori prove his class and quality when taking his Flemington track record up to five wins for a dozen starts.

“He’s really come on really well, the only thing in the back of my mind was drawing (barrier) four but Luke gave him a great steer,” Ellerton told Racing Victoria post-win.

“He’s just a good, tough, honest sprinter. He’s a dual Group 2 winner, now a Group 1 winner and he’s got a great CV, especially down the straight.

“It’s on our doorstep (this race), it’s a time-honoured sprint, we’re just chuffed to win the race.

“His CV down the straight is exceptional.”