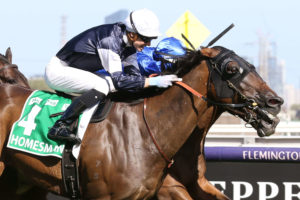 Following on from the stable’s Blue Diamond Stakes win with Artorius a fortnight back, the Freedman team were back to take home the Group 1 $1.5 million Australian Cup (2000m) trophy with the always-honest Homesman.

He came off an eye-catching third only a length off Paradee in the Group 2 Peter Young Stakes (1800m) and relished the 2000m distance in the time-honoured Australian Cup.

Last year’s Melbourne Cup winning hoop Jye McNeil retained the ride on Homesman and rode him to perfection out three-wide wide giving the horse plenty of room to wind-up.

Steel Prince took up the lead from Best Of Days, Homesman settled around fifth just behind his last start conqueror Paradee who got a lovely trail fourth then third throughout.

The pace quickened as the field approached the home turn, Steel Prince collared on the straight by the James Cummings-trained Best Of Days coming off a Group 2 Blamey Stakes (1600m) fourth.

The Australian Cup turned into a thrilling two-horse battle as Homesman moved up to fight it out with fellow $26 outsider Best Of Days at the 100m, the duo going stride-for-stride in an exciting photo-finish.

Top honours eventually went to Homesman who went up the inside to just get over the top of a brave Best Of Days with the Michael Moroney-trained Chapada rounding out the lucrative trifecta in third as a 30/1 shot in Australian Cup betting.

“Jye rode him perfectly, a bit of room to move. One thing he’s got is that tenacity and that real will to win.

“We couldn’t quite get that spot in The All-Star Mile, but this is perhaps this was a bit better.”