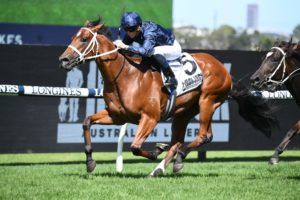 Home Affairs is into the $3.5 million Golden Slipper after a dominant 2021 Silver Slipper Stakes win at Rosehill. Photo: Steve Hart.

The blueblood son of I Am Invincible raced up to his expensive purchase price to win the 2021 Golden Slipper ballot exemption via a second-up win in the Group 2 $250,000 Silver Slipper Stakes (1100m) on Hobartville Stakes Day.

On debut Home Affairs was narrowly defeated when second in the Group 3 Canonbury Stakes (1100m) on January 30, but there was nothing stopping him in the Silver Slipper as he presented fitter for the run.

There was a good line out in this year’s Silver Slipper Stakes from the barriers, with the widely-drawn Lloyd Kennewell-trained Direct charging ahead to lead reeling off some blistering early sectionals to get to the front.

James McDonald meanwhile took the sit second the fence on Home Affairs, while the Godolphin-raced favourite Paulele settled into third.

With 600m to go, McDonald got off the fence and once on the straight he moved up on the outside of Direct going from home at the 200m.

In the final furlong, Home Affairs broke clear and raced home to finish a long neck ahead of the brave Black Opal Stakes-bound Rocket Tiger who got up into second after a hampered run down the straight.

It was a photo for third with Direct rounding out the trifecta off the gutsy run up front.

McDonald now faces a tough ask deciding which of the gun two-year-olds he’s recently partnered he will ride in the Golden Slipper Stakes back at the track on March 20.

Premier Sydney trainer Waller will be vying for his maiden Golden Slipper success, while McDonald chases his second after saluting on Mossfun for Hawkes Racing in 2014.

Mossfun is one of four recent juveniles to complete the Silver Slipper – Golden Slipper double along with Pierro (2012), She Will Reign (2017) and Farnan (2020) last Sydney Autumn Racing Carnival.

Home Affairs was at $26 in all-in Golden Slipper Stakes odds online at Ladbrokes.com.au before the Silver Slipper Stakes results and has subsequently firmed into $19.