There was a dead-heat in a thrilling Oakleigh Plate 2021 result on Blue Diamond Stakes Day between the progressive colt Portland Sky and WA-trained mare Celebrity Queen who had to share the Group 1 success at Caulfield. 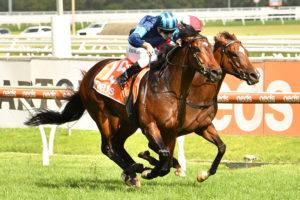 Portland Sky (outside) and Celebrity Queen (inside) ran a dead-heat in the 2021 Oakleigh Plate results at Caulfield. Photo: Ultimate Racing Photos.

“More than happy to share this, I wasn’t sure, but the horse has gone enormous,” one of the winning trainers, Laurie, said.

Portland Sky came off a lead-up win in the Group 3 Manfred Stakes (1200m) at the track when carrying 58.5kg to victory and relished dropping down to just 50kg for the Group 1 with young apprentice hoop Teodore Nugent coming aboard for the ride.

Nugent was nearly reduced to tears after a nervous wait to see the official dead-heat announced, happy to share his first Group 1 success with Perth veteran William Pike.

Dubbed the ‘Wizard of the West’, Pike has put together an outstanding record in Melbourne over the past season and turned the Oakleigh Plate into a genuine blockbuster finish with his run up the inside late.

“Gee, it was a long wat to the post when I heard the wizard blowing down my neck,” Nugent told Racing Victoria post-win.

“It’s a first Group 1 for everyone here, so a big thanks to the team.

“The emotions are starting to come out now!”

Four-year-old Celebrity Queen, runner-up in last November’s Group 1 Winterbottom Stakes (1200m), was racing outside of Perth for the first time fresh in the Oakleigh Plate.

She travelled in the front pack settled around sixth in the run as Ancestry from wide went through to lead from Portland Sky who was on the fence in second.

Ancestry was first to straight once they got round the home turn, but all eyes quickly went to young Portland Sky who took the lead going to the front at the 100m.

“He’s got an abundance of form around him. He took me a long way to the line.”

The gun three-year-old looked the solo winner, but Pike wasn’t going to be denied, going along the rails and getting Celebrity Queen to put her head down right on the line as the two horses crossed together.

“It was a good effort. I was trying to steer away from the inside…but I went where I had to go.

“She was very brave right through the line. She attacked every bit to the line.

“It’s great to be back…I’m eating a bit of humble pie today, but I’ll take what I can get.”

Also flying home late was Brooklyn Hustle who, after getting caught at the top of the straight, produced an enormous finish to get up for third and finish off the Oakleigh Plate trifecta.

Celebrity Queen could potentially run next-up Flemington on ‘Super Saturday’ in the Group 1 $1.25 million Newmarket Handicap (1200m), which she pays $15 in all-in betting through Ladbrokes.com.au – available here – to win.