Another brave run by the in-form mare Paradee to dominate the 2021 Peter Young Stakes results has the team looking at a Group 1 $1.5 million Australian Cup (2000m) run at Flemington on ‘Super Saturday’ with the Danny O’Brien-trained daughter of Epaulette. 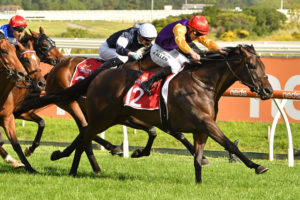 The ultra-consistent mare raced all the way through the spring, into the summer in Queensland and then returned to post her third consecutive win back in Melbourne in the Group 2 $200,000 Peter Young Stakes (1800m) on Blue Diamond Stakes Day.

Last start she won the $250,000 Magic Millions Open Quality (1800m) over the same distance at the Gold Coast in mid-January.

With the dominant Peter Young Stakes victory the bonny mare proved she was going just as good, if not better, ahead of a potential March 6 run at HQ in the 2021 Australian Cup for her Group 1 race debut.

“She’s had a big prep all the way through. I don’t think she’s missed a place.

“She’s just a champion mare and it’s a fantastic result.

“It just shows the quality she is. With age and a deeper prep.”

Drawn the inside alley in the Peter Young, jockey John Allen produced a well-executed ride.

Soon after the jump in switched across to get the mare into the sweet spot in the race, which was run without much tempo, and the on-pace position second behind the leader Homesman suited the eventual winner.

Allen tracked around second the outside before striking the front 250m out from the line.

Homesman was brave going with her and there was a wall chasing, but in the end Paradee ($5) was too strong and held on in a blanket finish.

The quality mare had three-quarters of a length to spare over the Chris Waller-trained runner-up Shared Ambition ($5), while Anthony & Sam Freedman’s $4.80 beaten favourite Homesman held for third.

Gleeson confirmed plans to back Paradee up in the Australian Cup field so long as she bounced back from her Group 2 success.

“If she won that race, which she’s done, we were thinking about the Australian Cup,” he said.

“It’s a race that’s profiling okay for her.

“There’s no reason whey we shouldn’t go there.”

All-in 2021 Australian Cup odds at Ladbrokes.com.au can be access in full here.