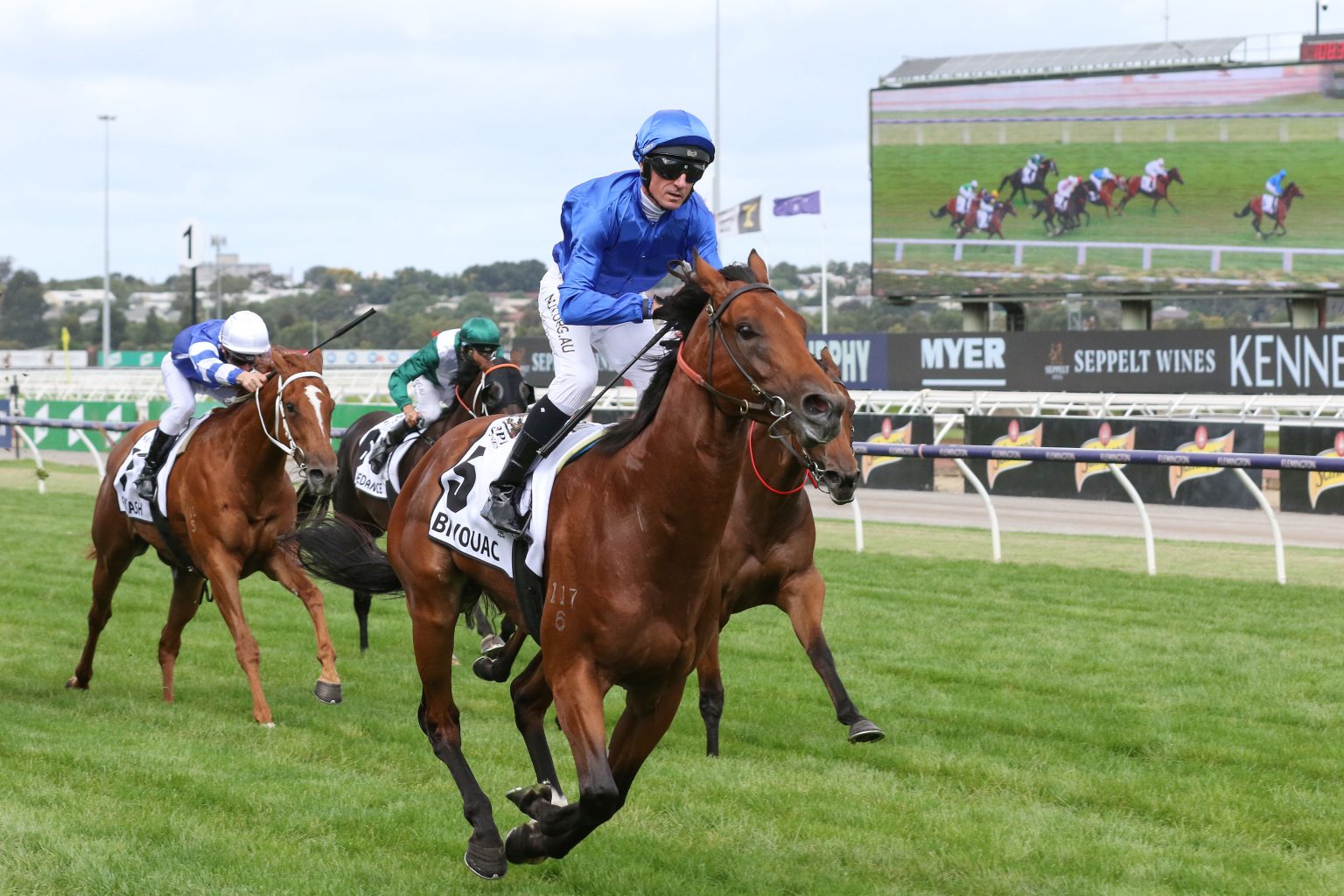 A field of eight smart sprinters is engaged for this season’s Group 1 $750,000 Black Caviar Lightning (1000m), and the early favourite Bivouac is drawn gate six with Glen Boss aboard.

Boss chases a third win in the weight-for-age feature having ridden two subsequent star stallions – Choisir (2003) and Fastnet Rock (2005) – to their respective victories a decade and a half ago.

He reunites with Bivouac after a strong end to the spring aboard the four-year-old son of Exceed And Excel.

Boss guided him to a second in the $15 million The Everest (1200m) in Sydney and the runaway Group 1 VRC Sprint Classic (1200m) win at Flemington by over three lengths last November.

Bivouac has an impressive record (3:2-1-0) down the straight at HQ and performs well fresh, but is yet to win over the short 1000m distance.

The bookies are taking no chances however and the entire is the firm $2.70 favourite through Ladbrokes.com.au.

Occupying the second line of Black Caviar Lightning betting at $4 is the Chris Waller-trained star Nature Strip in gate two with the flying Jamie Kah in the saddle.

Kah has been in absolute prime form this season and will be looking to guide Nicconi six-year-old Nature Strip to victory first-up in her maiden ride aboard the $5.9 million earner.

A genuine Flemington track specialist with four wins and a second from six runs at the course to date, Nature Strip is looking to break a nearly year-long drought.

His last victory was in the Group 1 TJ Smith Stakes (1200m) at Randwick last October, but he’s been competitive in plenty since including his distant second to Bivouac in the VRC Sprint Classic.

Waller also saddles-up the early Black Caviar Lightning market mover in class filly September Run who has been backed in from $6 to $5.50 to win her autumn kick-off.

The Exceed And Excel three-year-old won three on the trot at Flemington last time in, including her nearly two length victory over the boys in the Group 1 Coolmore Stud Stakes (1200m).

She’s been brought-on with two trials in Sydney ahead of her return to her favourite track fresh on the weekend where September Run will jump from barrier three with Craig Williams in the saddle.

Well-weighted with just 53.5kg at WFA after carrying plenty more weight last preparation, the filly is out to make it a flawless four-from-four record at Flemington when she takes on the older gallopers.

Six-year-old Fabergino was eye-catching winning the Listed Kensington Stakes at the track and distance in mid-January with 60kg and will relish coming back to 56.5kg here as the fit horse in the mix.

Pippie meanwhile looks for yet another Melbourne Group 1 victory after the Written Tycoon mare’s Oakleigh Plate success at Caulfield last February and the Moir Stakes over 1000m at The Valley last September.