2018 The Shorts – Ball of Muscle Too Good for Everest Hopefuls

Jockey Glyn Schofield and eight-year old gelding Ball of Muscle have made it back-to-back victories this prep following a resounding Group 2 win in the 1100m The Shorts at Randwick on Saturday.

Jumping from barrier six, Ball of Muscle took full advantage of the sloppy start from race-favourite Invincible Star, racing away from the barriers to lead for the entirety. 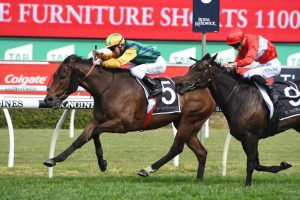 Glyn Schofield and 2018 The Shorts winner, Ball of Muscle.

Crossing the line in 62.87 seconds, the season veteran stuck to the inside part of the track to withhold a late challenge from Invincible Star, but as so often is the case, once Ball of Muscle has a lead, he normally proves tough to run down.

“It’s his year, it’s been terrific to me and this set of connections that own these horses,” trainer Joseph Pride told Channel 7 after the race.

“Very proud of this horse, he’s come back as an eight-year old and you’d have to say, career best form.”

While Ball of Muscle hadn’t previously earned a spot in the $10 million The Everest (1200m) at Randwick next month, the stable feels that if he continues to improve, it’s a path they are willing to take.

“Yeah certainly not ruling that out,” Pride said when asked about a possible nomination.

“He’s a live chance as is other horses that may or may not make it to the race. He’s a very good horse here at Randwick, he’s still got a little bit of improvement in him so looking forward to the next month with him.”

Saturday’s win marked Ball of Muscle’s third career win at the famous Sydney track, a resume that also includes four other placings dating back to 2015.

Most importantly though, Saturday’s win saw Ball of Muscle claim his first ever victory in The Shorts, a race he’s finished runner-up in on two separate occasions.

When asked about leading early alongside Big Money, Pride said the move was unexpected.

“Yeah, didn’t expect that.. but it’s nice when he gets a little bit of a breather, he’s so effective.”

The stable no doubt benefited from the scratching of race favourite, and Everest favourite, Redzel. The two-time Group 1 winner was ruled out just hours before the race due to muscle soreness following his win in the Group 3 Concorde Stakes (1000m) just a fortnight ago.

“Look we had a bit of good fortune today, Redzel came out and this other filly (Invincible Star) missed the start, but you’ve got to be Johnny on the spot and that’s where this bloke was today and able to take advantage of the situation” Pride said.

As for race favourite Invincible Star, his poor jumpout from the barriers cost him, and at $26 for The Everest, it’s a slightly worrying sign for a horse that would figure to lead in the race early.