Punters backing Kiwi raider It’s A Dundeel to win this Saturday’s Cox Plate 2013 in the absence of the retired Atlantic Jewel can now get Murray Baker’s five-time Group 1 champ at their best price yet as the favourite eases in the markets.

Running as Moonee Valley Race 10 at 5:40pm (AEST), this year’s $3 million Group 1 Sportingbet Cox Plate (2040m) lost its drawcard contender earlier in the week when Atlantic Jewel was ruled out due to a career-ending tendon injury.

Now the Cox Plate betting markets are focused on the horse that beat her home in the Group 1 Underwood Stakes (1800m), It’s A Dundeel.

The High Chaparral four-year-old will always be known as the only horse to defeat Atlantic Jewel, and gets a chance at a sixth Group 1 title on Saturday having missed the Caulfield Stakes due to a hoof abscess.

Their work since however has been outstanding and Baker is confident his horse won’t be beaten on fitness.

The bookies don’t seem as sure however with It’s A Dundeel easing out from $4 to $4.20 in the latest Cox Plate odds.

At Ladbrokes.com.au that means punters can get the Cox Plate top fancy at $8.40 thanks to their exclusive ‘Double The Odds’ offer on the big one on Saturday Bet now with Ladbrokes.com.au

Darren Weir’s striking grey stayer was last seen running a brave second in the Group 1 Turnbull Stakes (2000m), won by fellow Cox Plate hope Happy Trails, and is after their first win since the Lawrence Stakes at Caulfield back in August.

They are a market drifter however with their regular hoop and big race specialist Glen Boss made unavailable due to suspension, Ben Melham the replacement.

Occupying the third line of Cox Plate betting is then the Gai Waterhouse-trained Fiorente out from $4.60 to $5.50 to win the weight-for-age classic on way to the $6.2 million Group 1 Melbourne Cup (3200m) on the first Tuesday of November after their second in the two mile feature last year on debut down under.

The genuine Cox Plate market mover meanwhile is then Peter Snowden’s in-form three-year-old Long John who has firmed in from $8.50 to $7.50.

Punters are coming for the young Street Cry gelding who sees the distance for the first time.

Long John comes off a win in the $1 million Group 1 Caulfield Guineas (1600m) from October 12, and Snowden is hoping they can hold their own in the famous weight-for-age feature unlike his 2011 Guineas winner Helmet who was eighth to Pinker Pinker in that year’s Cox Plate.

“Two months ago, even last month, I would not have ‘pegged’ Long John as a Cox Plate horse but he has improved so much from race to race this spring,” Snowden told the Herald Sun this week.

“Then Long John won the Caulfield Guineas and the key to me was that he didn’t have a ‘gut-buster’ that day. He got a lovely run, sat off the speed and got out on the corner.

“When Helmet won the Guineas, he ran a race record and did all the work himself so it was much harder for him when he got to the Cox Plate.

“I kept thinking to myself that Long John has come through the Guineas so well, his coat looks great, if I didn’t give him an opportunity in the Cox Plate, I’d be robbing him of his chance.”

Long John will certainly have to be at their best if they are to become the 20th three-year-old Cox Plate winner in history, with just three doing so since Surround back in 1976.

“It is a very hard race for three-year-olds to win,” Snowden said.

“I don’t know about Long John at 2000m but all I can go on is what I have seen and he is very tough at the end of his races. I believe he can get the trip.”

Also firming in their price to win this year’s Cox Plate is then upset Turnbull Stakes winner Happy Trails ($16 into $13 or now $26 DTO) who looks great value with a gun draw (two) and Dwayne Dunn staying on.

See below for the full list of Cox Plate double the odds prices you can jump on now online at Ladbrokes.com.au – the only bookmaker in Australia offering this juicy double deal on the Plate! 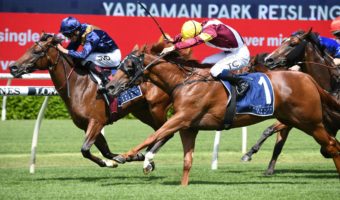 Richard & Michael Freedman have got two, gun youngsters into the $3.5 million Golden Slipper Stakes (1200m) field on March 20 with their progressi…

The John O’Shea-trained Lion’s Roar was sensational swooping late to win the...

In a remarkable performance by the 57kg topweight the Mathew Ellerton &...

There was a major upset in the 2021 Challenge Stakes results on Randwick...